Geddy is Kimberly Bond's Primarina, and the fifth Pokemon she acquired on her journey, as well as the last of the "original five" to be captured (the others being Paul (Kim's Butterfree), Sinatra, Dio, and Kaylan).

Geddy is just as kindhearted and modest as his namesake- if not even more so. He has a love for the band RUSH and all of its members, but not to the point of obsession, and he is always there to help another Pokemon in need. Most notably, he is adept at comforting other Pokemon through panic attacks, most notably the easily panicked Freddie. Thus far, Geddy has comforted Freddie through panic attacks twice, and generally serves as Freddie's main form of comfort that is not named Elton. As a Popplio and later a Brionne, Geddy is very much mature for his age, and is able to tell whenever his Trainer or another member of his team is under distress, which will usually be followed by him emerging from his [=PokeBall=] on his own. This was notably seen during Ian and Evelyn's Motostoke Gym Challenge, when, upon noticing Hoops having a panic attack he led them out of the stadium and gave them time to calm down, listening to what they had to say all the while. He's extremely humble and will often blush with slight embarrassment whenever somebody gives him what he deems is undeserved credit or praise. Unlike Paul and Kaylan, who will use their moves when necessary and won't hesitate to knock opponents out, Geddy is a full-on pacifist with regard to physical moves. He's fine with battling, but just doesn't like to use physical moves in battle, preferring instead to sing "Rivendell" by Rush to soothe opponents to sleep. However, Geddy will use physical moves whenever he finds it necessary to do so; upon hearing that Kim was planning to use him for Motostoke, Geddy recognized that he'd probably have to learn non-status moves in order to do so, and proceeded to learn both Aqua Jet and Ice Beam from Oshawittle. The latter move, however, accidentally struck Kaylan, causing Geddy to be absolutely horrified. Later on, in the Motostoke Gym Battle when he evolved, Geddy used it again and froze Kabu's Arcanine solid, causing him to go through a bit of a crisis afterwards.

Despite his relatively soft and kind demeanor, Geddy still has the exact same power when singing that his namesake does. His version of Growl is a full-on metal scream, and he can hit the high note at the end of Cygnus X-1 without strain- though of course, he won't admit that. Geddy can also be a rather emotional Pokemon, especially with regard to the members of Rush or when he hears about a horrible tragedy-- the death of Neil Peart brought him to full on-tears and-- as Orwell put it-- "profspeak", which shocked every member of Kim's team, as Geddy normally doesn't like to curse or yell at people or Pokemon. He also was taken completely aback by the hospitalization of David Bond, Kim's father, and sincerely hoped that he made a full recovery, and he also burst into tears of sympathy when he saw the burns that Hoops had gotten from a wild Centiskorch in their youth. Besides Freddie, Geddy also has a relationship with Orwell-- though not as close as the one shared between him and Elton, or between him and Peechee. This was most profoundly shown after Orwell evolved into a Crawdaunt and subsequently had thoughts that he had turned evil due to him now being a Dark-type Pokemon (the Dark-type is known as the "evil type" in Japan, and many Dark-types, including most Crawdaunt, are associated with aggression, dirty tactics, or mischievousness). In response, Geddy was very quick to reassure Orwell that despite his evolution, he wasn't the least bit evil, and that the same was true of other Dark-type Pokemon or Pokemon that know Dark-type moves (pointing to Dio specifically as an example). Geddy is also the second Pokemon on Kim's team, after Elton, to fully accept Orwell's use of Newspeak- though unlike Elton, he can't always understand it.

As of Motostoke, Geddy often wears a pair of round red glasses similar to the ones worn by his namesake. They are not Choice Specs; just regular glasses.

Kim's personality file on him reads as follows:

"NEW POKEMON: GEDDY THE POPPLIO. EVEN THOUGH I'VE ONLY BEEN WITH HIM FOR A SHORT TIME I CAN ALREADY GET A SENSE OF HIS PERSONALITY. HE IS EVERY BIT AS SWEET, HUMBLE AND MODEST AS HIS NAMESAKE, AND IS PROBABLY EVEN MORE SYMPATHETIC THAN KAYLAN IS. RIGHT NOW AS I AM WRITING THIS HE IS CALMING DOWN AND TALKING TO THE SOBBLE AND SCORBUNNY. HE ALSO LOVES [RUSH] AND [DREAM THEATRE], WHO HE CALLS "METAL RUSH". I AM NOW SITTING HERE WONDERING WHAT HE WOULD THINK OF [NEIL PEART] DYING. RIP [NEIL PEART] 1957-2020. (...) GEDDY IS PROBABLY THE SWEETEST POPPLIO I HAVE EVER MET. HE IS CURRENTLY SINGING "RIVENDELL" TO FREDDIE. AKA THE SOFTEST SONG RUSH HAS EVER RECORDED. I AM ABOUT TO START CRYING." 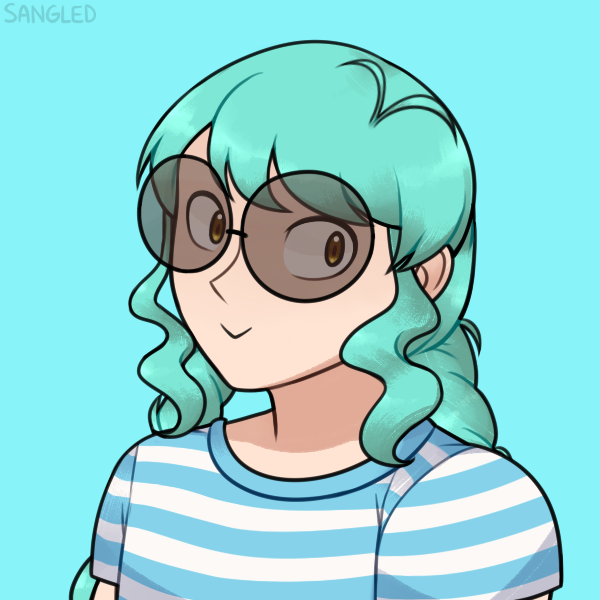 A prospective Geddy gijinka, as done by Goldenheart388.