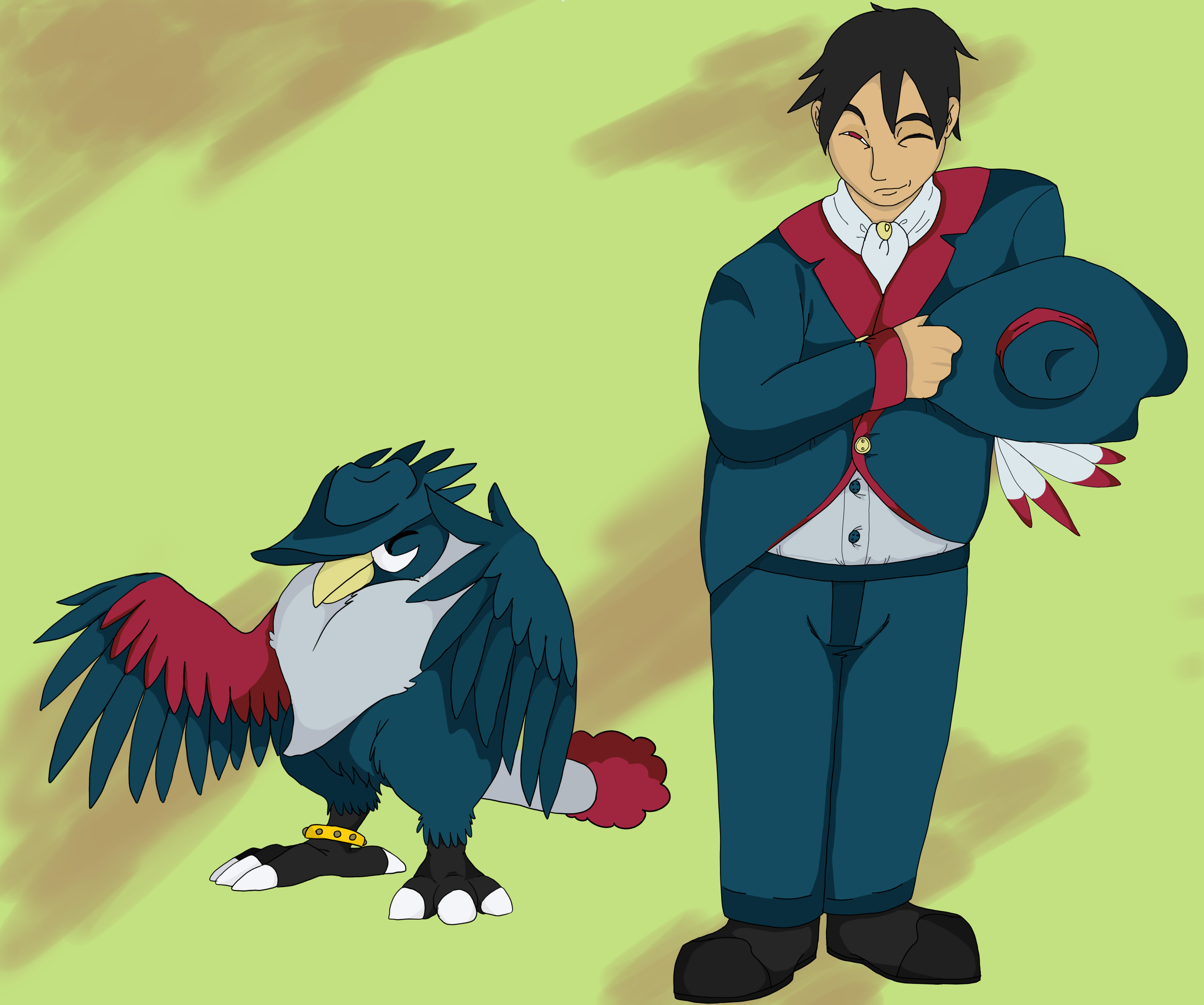 Portrait of Sholto as both a human and Honchkrow. (Commission by RexDraco)

"Well, Bert, looks like you were wrong. There is a way to do it. Even if it's highly dependent on a large ruse and an inefficient means of transformation."

Sholto is a 23-year old Werehonchkrow trainer from Lavender Town, as well as a member of Shun Hontou's team and former member of Lawrence Cain 's. He is rather trusting, to the point where he's unintentionally helped people with less than pure intentions and joined Team Neo-Galactic with the purpose of trying to convince Lawrence to turn to the side of good. He is generally in a good mood, though somewhat eccentric, desribing things as interesting or Sneasel-y semi-frequently. He also has a desire to find out secrets and eavesdrops a bit, though has been doing it less often than he did when he first joined. He knows how to communicate with ghosts due to his mother's instruction. He also has a lack of knowledge of almost anything pop-culture related to an amusing degree. He has embraced his Honchkrow side more upon becoming a weremon to the point of being in that form exclusively.

Not too much was out of the ordinary with Sholto's early life for the most part, besides his mother teaching him how to talk to Ghost-type Pokémon. A bit before his 10th birthday, his parent's Pokemon, Phud and Cody, gave birth to a Poochyena who later joined his team as his first Pokemon. Sometime from an incident involving a vengeful mother Marowak to the conversion of Pokémon Tower into a Radio Tower, he also caught a rather angry Haunter.

When he was around 15, he headed out at a first attempt at a Pokémon Journey, though he ended up battling a girl and her Gurdurr trying to steal his Mightyena, which bothered them both enough to stop the journey at that.

Around 2 years later, he began his journey proper, having more success this time, beating a Gym Leader and catching two more Pokémon, before running into some members of the J-Team in Pewter, finding out some interesting things from them, and vowing to travel with them to discover more interesting things.

Recently after joining the team, he was chased by a wild Lickitung, which he inadvertantly caught. At some point later, he got involved in a not-especially-elaborate trading sequence to get Lina a birthday gift, in which he received a Magnemite from the GTS. Sometime after this, he joined Straw and Crewe in a search for an Invisible Shiny Bulbasaur, during which he encountered the girl again, who was still interested in stealing his Mightyena. To try and be more prepared, Sholto caught a Mankey because he assumed most of Jay's Pokemon were weak to Fighting-type.

A while later, after visiting back home during a Halloween Party, Sholto encountered Jay again. He offered to battle her, risking Gogie, because she had a pendant that was stolen from Crewe, whose function Sholto was not yet aware of. Sholto lost the battle, and Gogie in the process, so decided to try and train harder in an attempt to get him back. He originally attempted to conceal his problem, but due to Crewe's searching for her pendant, he was assumed to have stolen it himself, but decided to tell the others what had happened. A bit later, with the help of Tagg, they were able to find Jay, subdue her, and get Gogie back. In the process, though, Sholto found out Gogie had felt abandoned, though they had a talk and all was mostly well.

Shortly after this, Sholto discovered a H -> P Armband, which he then used to become a Murkrow. During this, he got caught in Crowley's plans to take over Goldenrod, though exactly what happened with the takeover attempt is unknown. Around Christmas, the group decided they would head to Crewe's Cave. While he was up there, Sholto got lost in a mist generated by a Snover and ended up catching her. Sholto also received a Gible Egg as a Christmas present.

Since then, due to not having as much to do, Sholto started challening Gyms in Johto again. He also managed to catch a Rhyhorn in the Safari Zone. Shortly afterwards, Finn's egg hatched and he ended up taking on Likewise as a team member when Crewe went missing.

Little of note happened involving Sholto as the team headed to Holon City, other than a Mareep joining the team.

After spending a bit in Holon City and everyone was talking about their ancestors, Sholto discovered he was cousins with Jacob and Edge was his ancestor.

Sometime after the scientists had been mostly taken care of, Sholto encountered someone named Verax and acted in his usual way. He ended up discovering that his Hydreigon, Balthazar, was a Shadow Pokemon, though, and, as a result, was attacked by Verax and had to be hospitalized. He was released about a week later after Tagg shook him like the Happy Mask Salesman for telling Verax things he probably shouldn't have.

Human: Original default. Is fine with it, though generally prefers Honchkrow if it isn't inconvenient.

Crow's history in the AU is largely similar to that in the OU, except for the last year, roughly. Gogie took longer to be ready to head out on the journey, so he didn't start his journey until a bit before the dragons started using the monification bombs. As a result, he was turned into a Murkrow. He was able to escape from Saffron and return to his home in Lavender, though, with the help of Vrang and Lyuri. 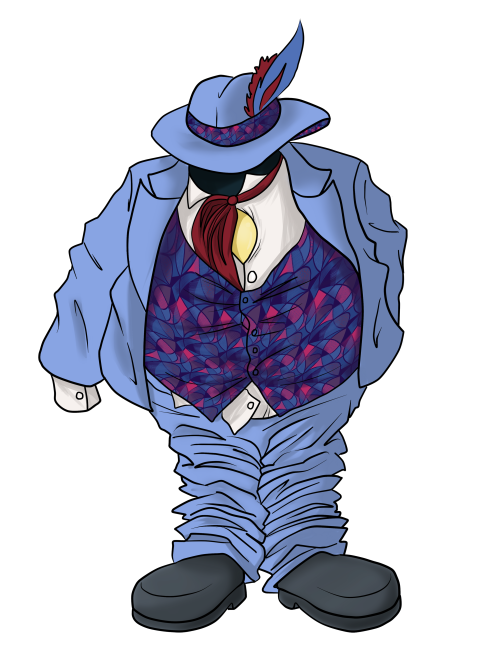 Portrait of Sholto wearing his Honchkrow suit to disguise himself as human. (Commission by MousaThe14) 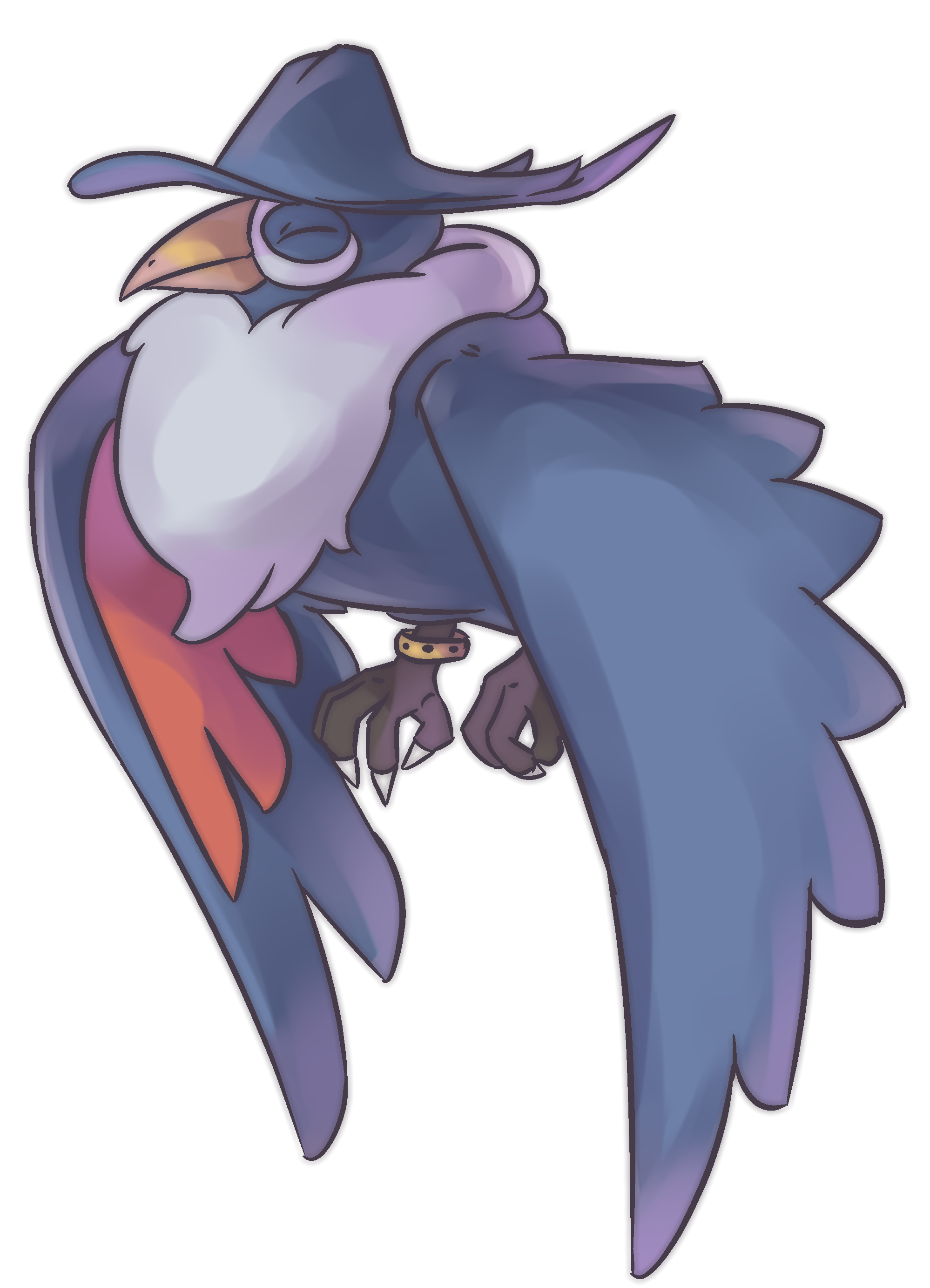 Portrait of Sholto. (Commission by autobottesla) 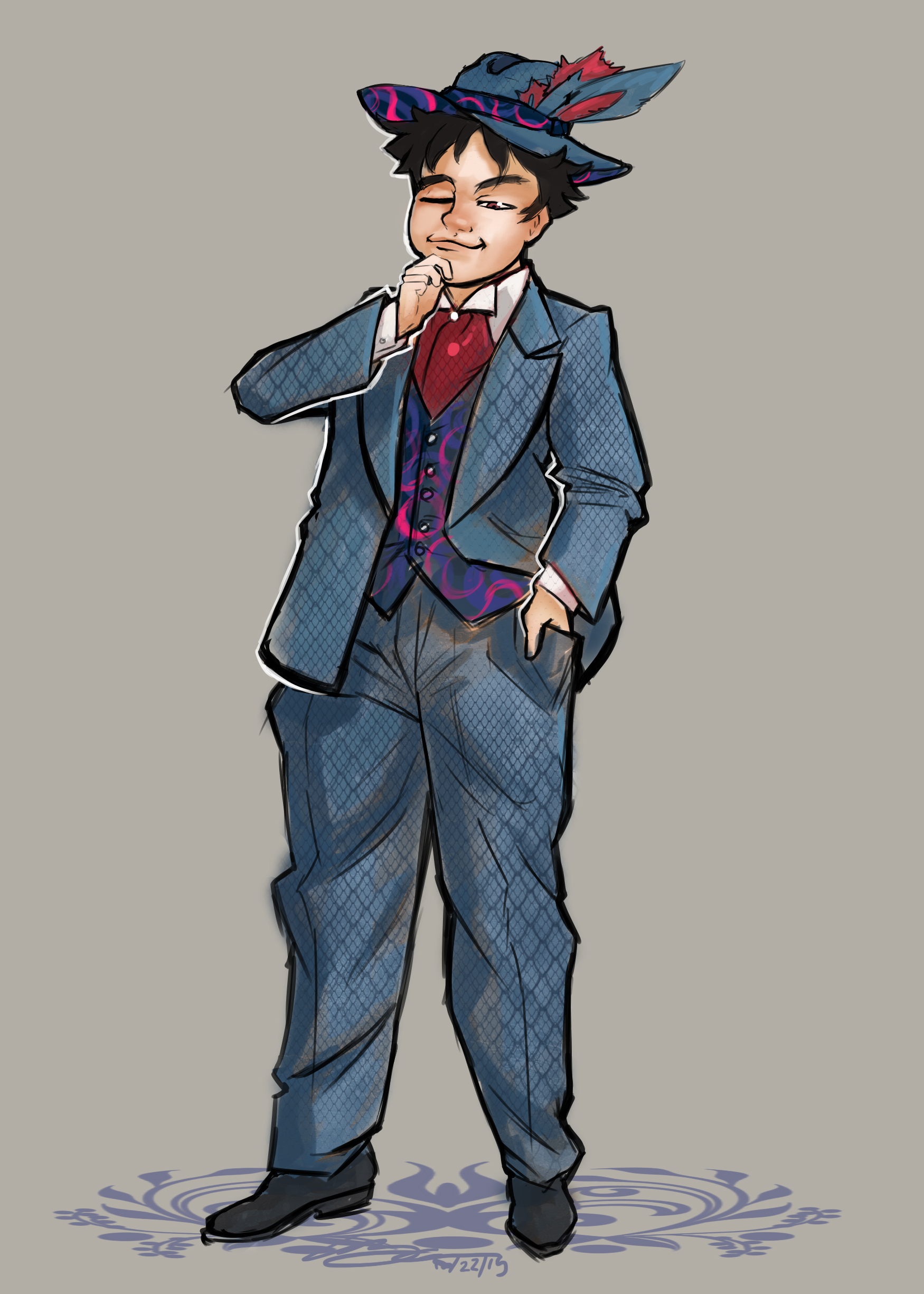