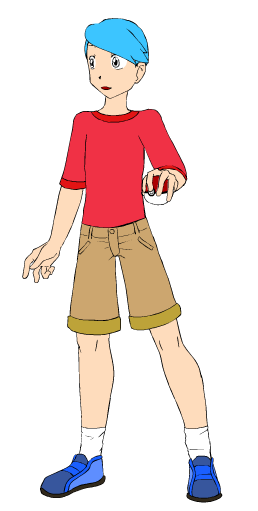 Mezzoforte Morendo is the original owner of Sunny and a specialist in training the Eevee line. While assigned male at birth, recently they have begun to question their gender identity. To avoid confusion between them and their sister Mezzopiano, they go by Forte for short.

Forte tends to wear basic, simple clothing such as T-shirts and shorts. They keep their hair short so that it's easy to take care of. While they have their siblings' blue hair, they are the only one out of the four to not have green eyes.

Forte is rash and impulsive, and has a strong lack of tact. However, they are kind at heart. Lately, they have also learned to be more patient. They have a tendency to complain about things, leading others to call them whiny.

Forte and Katie were dating for a while, but have decided to pull back their relationship. They still consider each other close friends.

Forte strongly dislikes Herbert, who ended up kicking them after they were turned into an Eevee. They also are not fond of anyone who dislikes Eevee or Eeveelutions.

Forte was killed by a Bisharp in the invasion of Castelia City after he refused to submit to Scolipede and Artemis' rule. His team is still alive, though they are all different evolutions. Naturally, this happened before he had an opportunity to consider his gender identity issues.

Some relevant items that Forte owns: