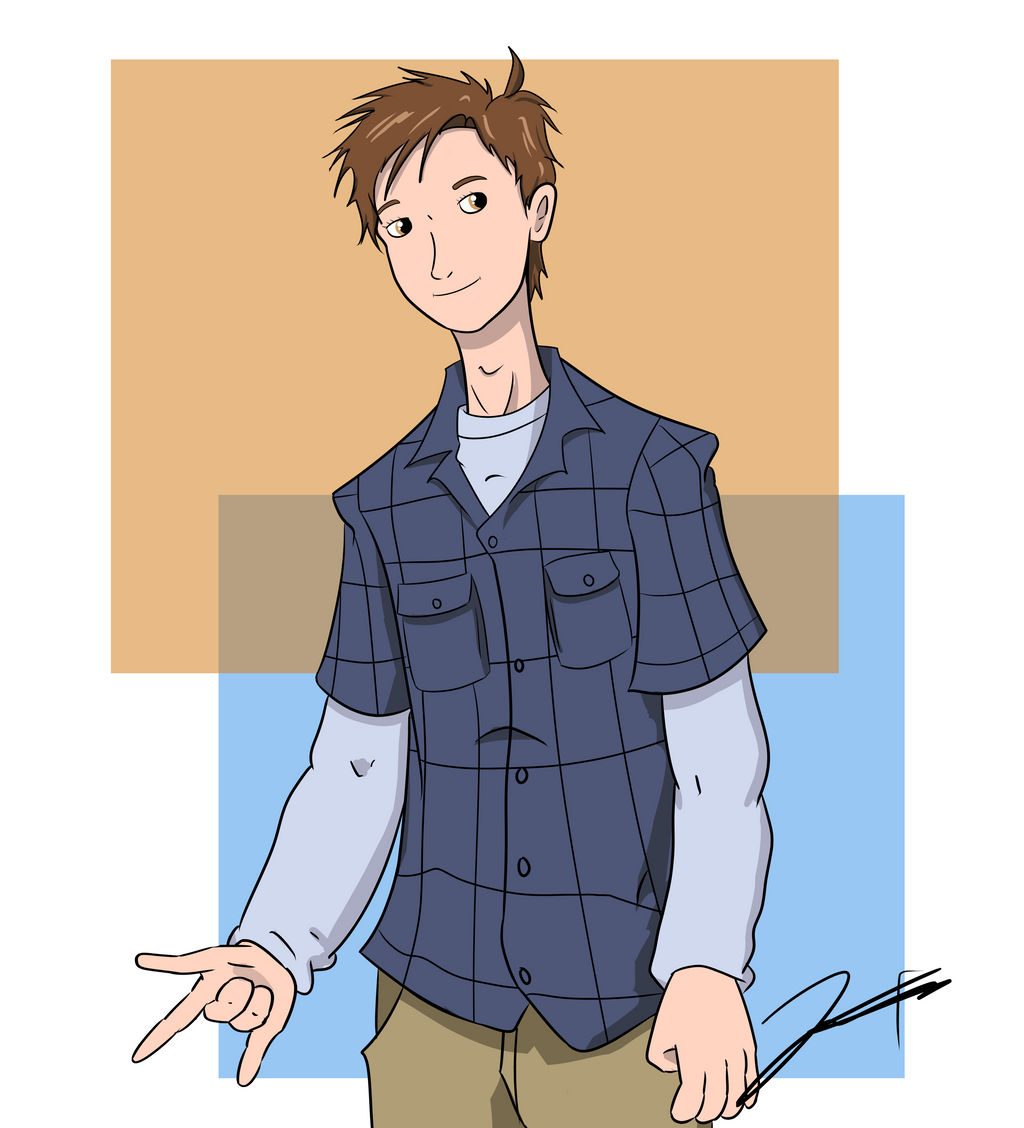 "Oh crap! Where's my super suit? This is the wrong back pack! Crap. What if it's still in the Stormchaser? Well, at least... Tobi... oh shit. Where's Tobi! Oh Arceus I'm on my own here"

Thomas Andrew Petersen, known as Tommy is an Unovan photojournalist with the Geographic Society. He mostly provides content for its news magazine, The Geographer Weekly, with his main claim to fame is taking pictures of his alter-ego Arachna-Guy, the Spinarak/Ariados-themed crime-fighter who patrols the streets of Castelia City. He is the secondary PC of JG-Says-Things-And-Stuff.

Tommy has brown hair, pale skin, and hazel-colored eyes. Standing at 1.78 meters tall, he looks like he was cloned from a sarcastic Hollywood Nerd template, a seemingly lanky young male with a fit athletic build typically hidden in layers of clothing and a friendly face that makes you think "how is this good-looking guy an unpopular nerd" (well, at least up until he opens his mouth). His first outfit as Arachna-Guy was a makeshift-looking suit colored after a shiny Ariados comprising of a hoodie, balaclava, and a pair of goggles. The same color scheme was adopted in the second suit, which is a glossy, armored form-fitting full body suit. 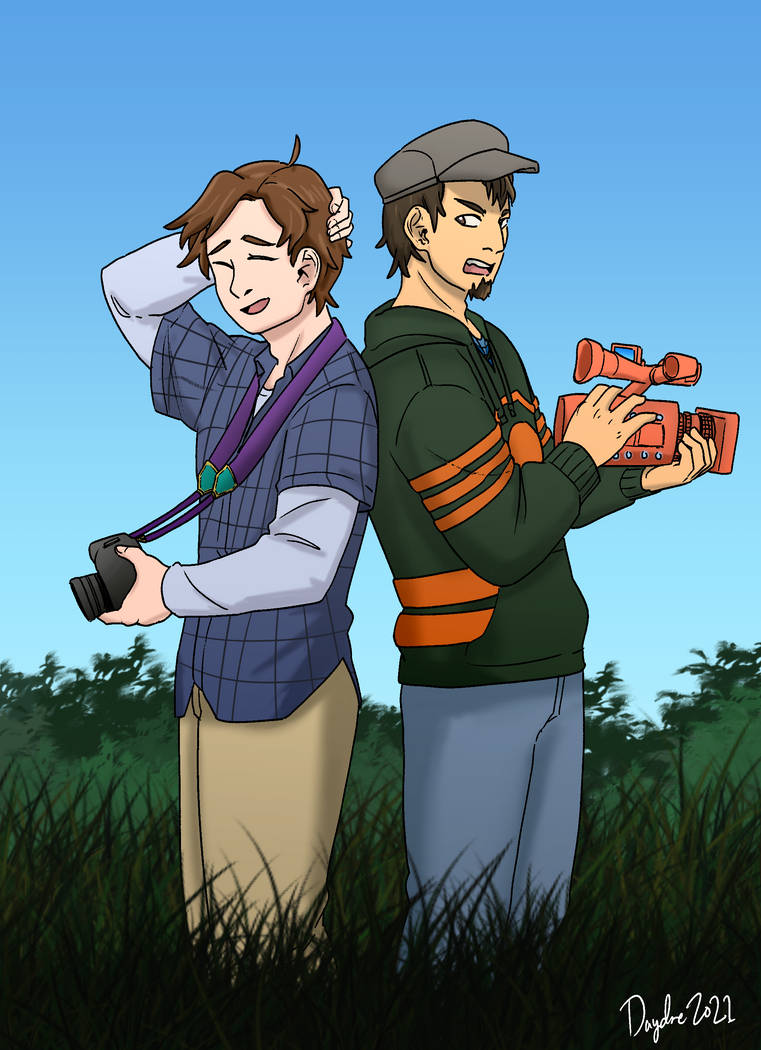 "Just a typical day on a field assignment." Art by Daydre

Awkward, adorkable, and annoying are the three words that describe little Tommy Petersen. Described as a good kid who's not quite dependable, the young lad often geeks out at the slightest provocation, quoting and referencing movies from the 80s like clockwork. Most people know him as the only photographer in The Geographer Weekly to consistently deliver clear (and incidentally very flattering) photos of the elusive superhero Arachna-Guy. He presents himself as an overenthusiastic Arachna-Guy fanboy and speaks praises of him constantly, which grates on a lot of people.

Part of his interest in the idea of Arachna-Guy may stem from his fondness for arachnid Pokemon. His starter is a Spinarak, Tobi, rescued from a Best Berry subsidiary laboratory involved in illegal experiments, and had worked alongside Professor Conroy Hawthorn in raising Kabutos in a facility at Castelia City University.

He lives with his Aunt April in Castelia, his cousin Sara, Sara's husband Jeff, and their daughter Miley. 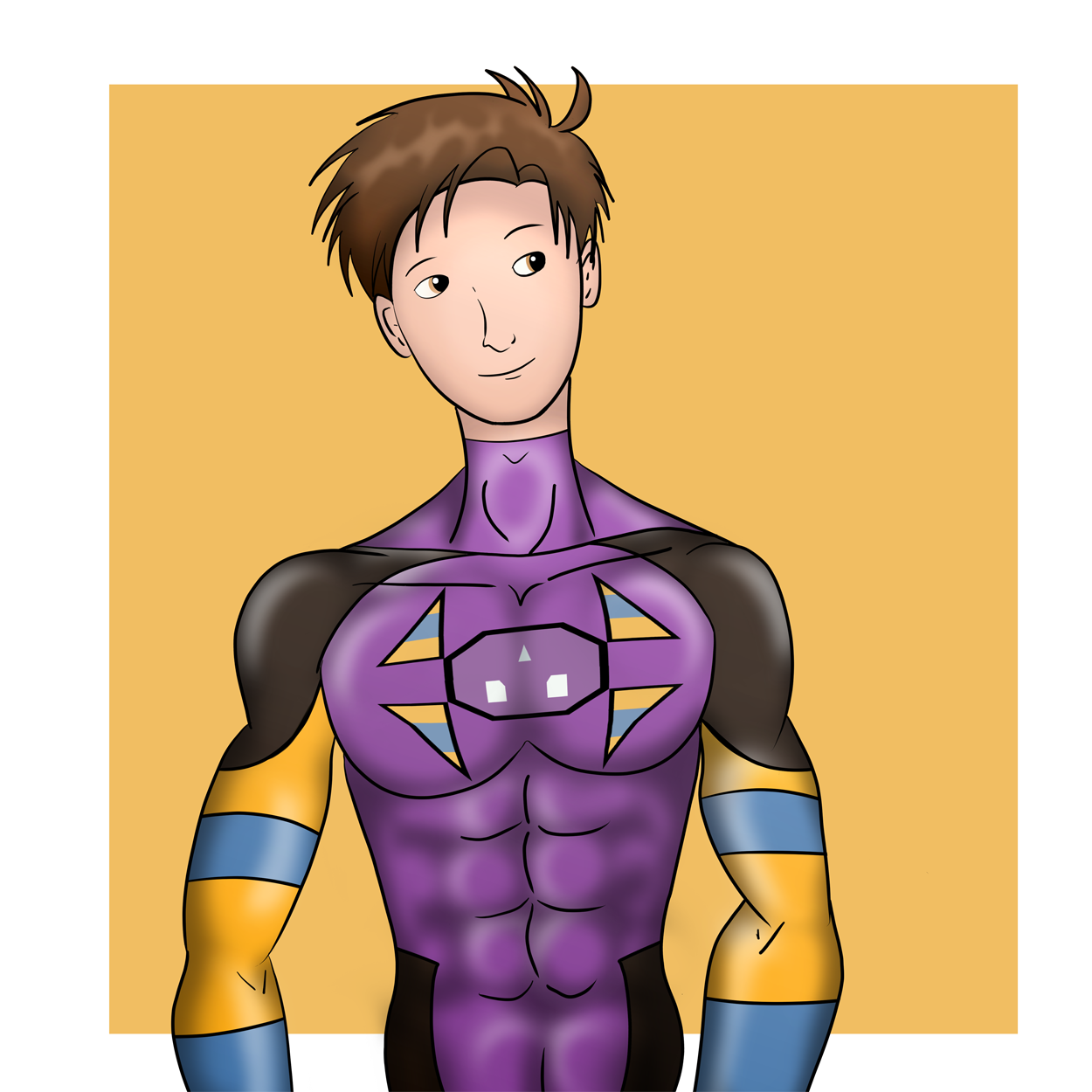 Both him and his alter-ego share a tenuous relationship with his boss, the former for dating his daughter Jane Stacy and the latter due to Hank's own doubts about the presence of superheroes, an idea that isn't as irrational as it would seem, or so he was told.

Shutter is one of the many friends he made at the Geographic Society and serves as an older brother figure and mentor. He also shares an almost familial relationship with Gimbal; she was later revealed to be his long-dead mother Stephania.

One of his superiors at the Kalos division, Jean, serves as a tertiary father figure, though there may be tensions between them as he and Jean's daughter share a mutual attraction.

Tommy is considered attractive by a few people; people who have developed a crush on him include Jean's daughter Catelyn, Flash Grant, Professor Hawthorn's daughter Stephanie, Jetta Sullivan, and Detective Shun Hontou. He was once in a romantic relationship with Jane, Hank's daughter.

He has become the immediate superior of Ivan, who recently became a Geographic Society intern.

He and Jonathan Halliburton are casual acquaintances, but until recently they've only ever talked in Kalosian and still barely know one another.

Silas was able to piece together Tommy's identity rather quickly and was willing to give him a much-needed upgrade. Tommy gets along well with Silas and he appreciates the efforts the latter went to create the suit. They share a relationship that's simultaneously cordial enough to be friendly but still distant enough to largely be professional.

Upton Braun subconsciously ate his lunch around ten times and they've shared a rather frienemy-ish relationship ever since. 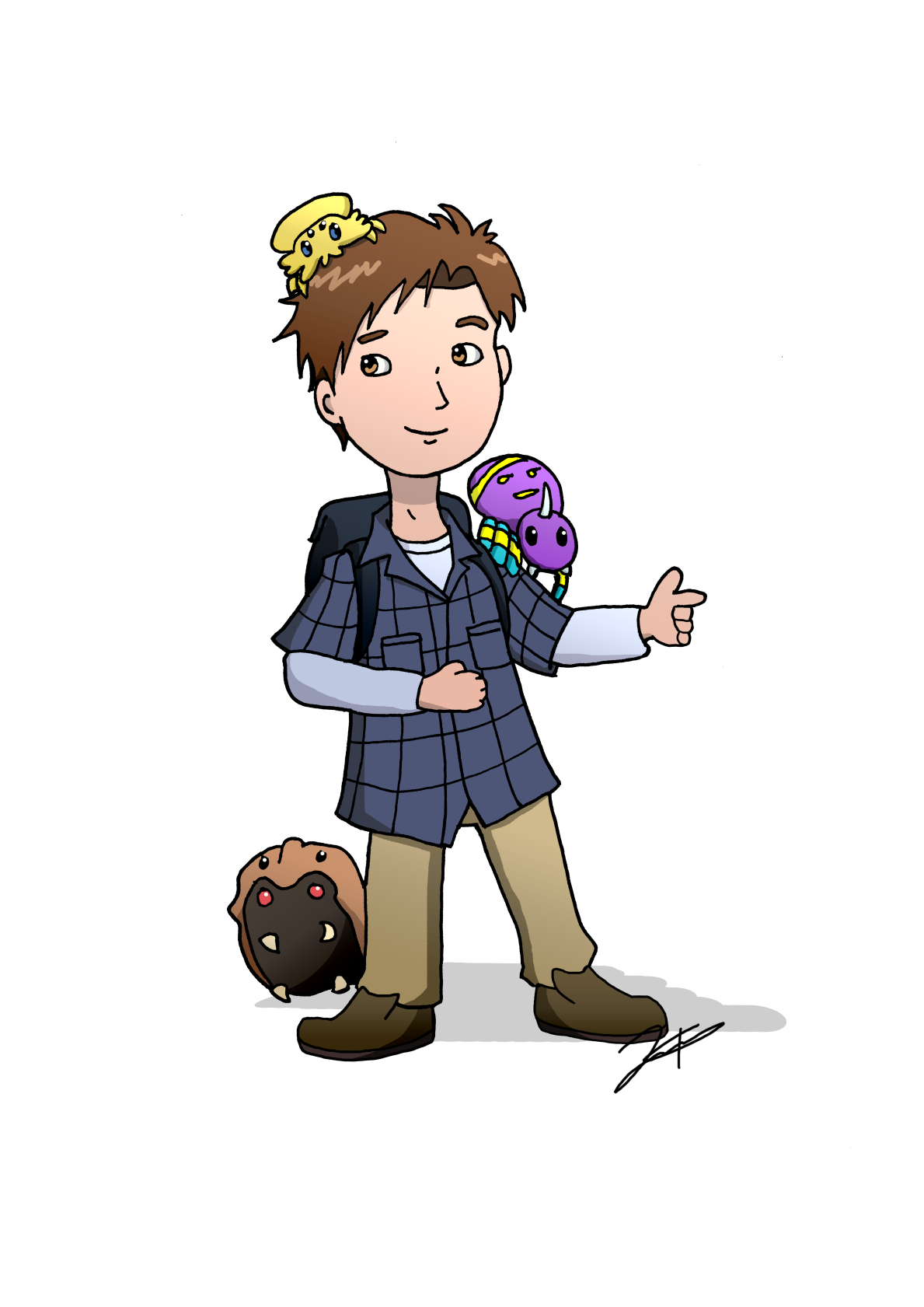 "Arthropods are awesome. Don't let anyone tell you otherwise."

Tommy Petersen was the son of writer couple Stanford and Stephania Petersen, known for their relatable written fiction and rather outspoken views. His middle name was a Galarization of his paternal grandfather's name, Andrei. He was orphaned at the age of five after his parents mysteriously died, which investigations later found to be linked to a Team Rocket agent who was once tutored by his uncle Ken. Ken, his father's younger brother, took him in.

One day, when he was 15 and played hooky while on a field trip to a Best Berry facility, he discovered an elaborate and cruel Spinarak silk-harvesting scheme. Sensing "hey, free Pokemon," he stole an oddly colored Spinarak, which proceeded to bite him. This led to a contrived chain of events that would lead to Uncle Ken being killed by robbers who were watching a movie. As he lay dying, he told Tommy something he couldn't remember but, to his recollection, may have involved responsibility and power somehow. He couldn't really tell because the Spinarak bite was acting up and Aunt April was crying, but what little he did remember was etched in his mind.

In grief, he buried himself in his chemistry textbooks and began reading his uncle's old comic books, becoming rather fixated with superheroes in the process. When the opportunity to get paid to take pictures of a mysterious vigilante came, he seized his chance. Also, he anonymously had the Spinarak ring busted.

Tommy, upon sending high-res images of the elusive Arachna-Guy to the Geographer Weekly's head honcho Hank Harvey, triggered the editor's fixation on finding the true motives of Castelia's new vigilante. This launched his career at the Geographic Society. He started as intern and later took on a part-time staff job at the Geographer Weekly. Shutter had been tasked with introducing him to the ropes of the publishing industry and ended up befriending him. The two get along well and treat each other as friends.

Tommy acquired a sleeker modern superhero suit from Silas during the Asimov Halloween Party in 2018.

Tommy's counterpart is known exclusively as Andrew (or Andy) in this timeline. Having long retired from being Arachna-Guy, he is presently the editor-in-chief of the Geographer Weekly. He had served as a paternal figure toward David Albright, who has issues with his own father. This relationship is said to recur in several other timelines.

His formal retirement was a result from an incident that led to a career-ending injury that gradually left him unable to use his lower legs. By the time of the Lillifuture's present, he is in a wheelchair. He reconciles with and wins over Hank Harvey and resumes his relationship with Jane. Together, they have two children, one who goes by their mutual first name (but is just called Junior) and another named after his father Stanford.

Thomas is an adventurer and archeology intern in an alternate timeline reminiscent of pulp stories from the 1930s. Not a superhero in this timeline, he was dragged into the main timeline during April Fool's Day due to spacetime rifts and is at present stuck there as a faller. Prior, he was in the process of protecting a sacred Horonjin artifact from the hands of tomb robbers.

Tommy is alluded to as a younger editor of the Geographic Society, where he has come into conflict with Ectoplasma-Guy (an alternate Hank Harvey).