Brie is a secondary player character controlled by the troper memyselfandI2. 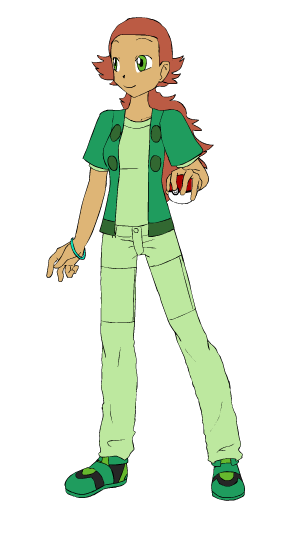 Brie (full name Brie Madrigal) hails from Kanto, where she received Skyfire as a starter. Originally not intending to go on a proper journey, she just traveled around Kanto with Skyfire, until Skyfire evolved into a Charizard after a battle in Lavender Town. Deciding to try the Gym Challenge, she flew to Pewter City, where she ran afoul of Zapdos. Still having an interest in flying, Brie left Kanto, taking the Gym Challenge in Johto instead, only later returning to her home region to complete the challenge there.

She had also traveled quite a bit before her initial appearance in Holon.

Brie joined the group here, but aside from this did not play a large part in the arc.

Brie reached Orre by stowing away with Amanita on the Team Glacier airship. She was the only witness to Every's kidnapping.

She assisted in the raids against Cipher, and during the final battle stayed behind in Gateon Port to prevent them from gaining ground.

Brie obtained Zebub and Ramphyros during this arc at unknown times.

However, she spent most of the arc detached from the J-team, busy with something she claimed was very important. She has not yet revealed what she was doing during this time, but at some point she developed the ability to understand Pokémon.

Brie was not active in Ranger-2.

Brie was largely not active in Hoenn-2. Towards the end of the arc, she went with Ever, Amanita, and All to rescue PEFE!Every from Revy II. She fought Baccarat, Revy II's Togekiss, and was only narrowly victorious.

Brie was not active in Re: Glitch.

Brie caught Calamity during Alola, but was otherwise largely not active. Along with Amanita, she located an underwater grotto that Revy had left for his descendants, and brought Ever along to see what was inside it. However, they were forced to flee when they learned it had become occupied by Kartana.

When the rifts opened, Brie seemed to have a slightly greater understanding of the situation than her cousins, and made several references to multiversal experience. However, she refused to explain herself, and quickly ran off to parts unknown.

Brie is exceptionally friendly and outgoing. Even when in dangerous situations or when dealing with an enemy, she rarely loses her cheer, and she is unfailingly kind and polite to everyone. She does her best to be helpful at all times, to the point where she often loses sight of self-care in the process.

Despite her outgoing personality, Brie is often mysterious, and often disappears for long stretches of time, without explaining herself.

Brie has, after a bad encounter with Zapdos, a deep hatred of birds. Consequently, while she is a Flying-type trainer exclusively, she does not catch any Pokémon that could be considered a bird.

Brie is a very careful trainer, maintaining tight control over her team's tactics and movements in battle. She has numerous plans, attack patterns, and specific commands, even using different languages to convey nuances regarding a specific tactic. Her general strategy is to keep her Pokémon moving constantly, focusing more on consistent delivery of attacks than on the power of any individual move.

In serious confrontations, Brie will join the fight herself. While she has no particular abilities, she is reasonably trained in hand-to-hand, and can provide an adequate distraction or interference to line up attacks from her team.

Brie always wears green, because Wind is Green. Unlike Ever and Amanita, her hair isn't dyed to match, and she usually keeps it in a ponytail to avoid it flapping around when she flies.

Brie only recently met the J-team, and does not have many relationships. She does get along with Joseph, though.

Brie finds Lucius somewhat aggravating for his tendency to make fun of her over her name being a kind of cheese.

Brie is distant cousins with All, Amanita, Ever, and PEFE!Every, and all five are descendants of Revy. Unlike most of her cousins, she has no particular animosity with anyone.

Dislikes: Birds flying over her

Brie's fate in the AU is unknown. Considering she lived in Kanto though, the outlook is grim.