From We Are All Pokémon Trainers
(Redirected from PEFE!Every)
Jump to navigation Jump to search

PEFE!Every is a secondary player character controlled by the troper memyselfandI2.

She is Ever's counterpart at PEFE HQ, who was first encountered during the AU Arc. She used to be physically identical to Ever, but identifies and (as of Orre) presents as female, and sometime between Hoenn-2 and Alola altered her genome to match. 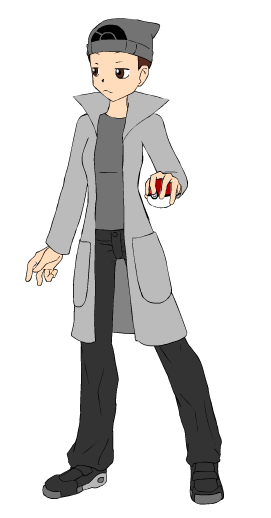 PEFE!Every was born in the PEFE HQ, though at the time it belonged to Pokéfutures, to two Pokéfutures researchers. At some point, she became lost in the underbelly of the HQ, and did not manage to return to her parents before the takeover of the headquarters by PEFE. She was eventually located by PEFE, and began working for them as soon as she was able.

PEFE!Every only rarely leaves HQ, so does not show up in many arcs. Her first appearance was in the AU, as a random PEFE researcher. Her first appearance in the original timeline was in the Orange Islands, where she periodically encountered Ever, quickly developing a mild rivalry with her lookalike. She also made brief appearances in Hoenn, where she attempted to stave off falling ash from destroying Fortree.

She then returned to PEFE HQ, and did not leave again until Orre.

PEFE!Every showed up at Gateon Port along with other PEFE reinforcements called by Tangent. This was the first time she presented as female onscreen. She quickly returned to HQ after the battle of Gateon Port.

PEFE!Every appeared briefly in Kalos, apparently taking a vacation. She was otherwise inactive, and returned to HQ after this until Hoenn-2.

At some point towards the end of the arc, PEFE!Every was kidnapped from HQ by Revy II, and held hostage for a month. During this time, she built the improved mech suit for Cornelia out of boredom.

Upon finally being rescued, she returned to HQ, and decided she had no further interest in leaving again. She built a remotely-operated robot to do fieldwork with, and stayed inside.

PEFE!Every was largely inactive during this arc, though she provided some minor assistance in negotiations with the Scythermen.

About halfway through the arc, PEFE!Every's team decided she needed to address her fear of the outside world, and teleported her to Alola. In an attempt to get home, she joined Mobius, only to find that the jet she'd stolen from Terry years ago had been destroyed, and she was stuck in Alola.

She decided to work as a mole for Tagg within Mobius, and spent most of her time studying Nihilego toxin. However, during this process, she accidentally altered herself to read as a Faller to Ultra Beasts. Upon leaving the airship, she was attacked by Gnho the Celesteela, and made a deal with them to build an Ultra Wormhole. Finding herself uncertain of her ability to do this, she made a deal with Izaya, agreeing to retrieve a flash drive from a Cipher compound in exchange for Mobius locating an Ultra Wormhole to send Gnho back home through.

During the retrieval, PEFE!Every was severely injured by Carna, and spent the remainder of Alola in recovery.

After recovering from her injuries, PEFE!Every returned to work for Mobius, also joining Team Iron.

PEFE!Every is an exceptional scientist, with a notable work ethic and extreme focus on whatever it is she's trying to do, to the point of ignoring pain or even severe injury. However, her regular ethic suffers for this, and her experimentation is often not entirely morally sound. She is also ruthlessly pragmatic, applying whatever measures are necessary to get a job done. She believes that everything can be explained and manipulated, and doesn't appreciate it when the world defies her attempts to do so.

She is extremely paranoid, particularly when it comes to leaving PEFE HQ. This leads her to create extreme measures in the interest of her own protection, regardless of the harm this can cause to others.

Despite her attempts at remaining unemotional, PEFE!Every is not nearly as stoic as she presents herself. She is prone to anxiety and panic, and has no real ability to maintain her cool in stressful situations. Furthermore, after being abandoned by her parents as a child, she worries that others will do the same, and coupled with her pragmatism she has developed an intense fear of failure in any capacity.

PEFE!Every speaks in a quiet voice with little inflection.

PEFE!Every does not battle. While she makes an effort to teach her team every available move in order to best determine their capabilities, she does not train her Pokémon to fight, instead teaching them techniques for assisting her in her lab work.

PEFE!Every dresses practically, usually wearing a labcoat over jeans and a T-shirt. For reasons known only to herself, she dresses entirely in varying shades of gray.

She is fond of hats.

PEFE!Every is distant cousins with All, Amanita, Brie, and Ever, and all five are descendants of Revy.

PEFE!Every doesn't get along well with Ever, finding them strange and a little creepy. In turn, Ever considers her to be unnecessarily stoic and narrow-minded as to the possibility of magic. They became somewhat closer in Alola, though still frequently argue.

PEFE!Every looks up to Tagg as her boss, and to some extent as a father figure. She likewise views Echo as a mother figure.