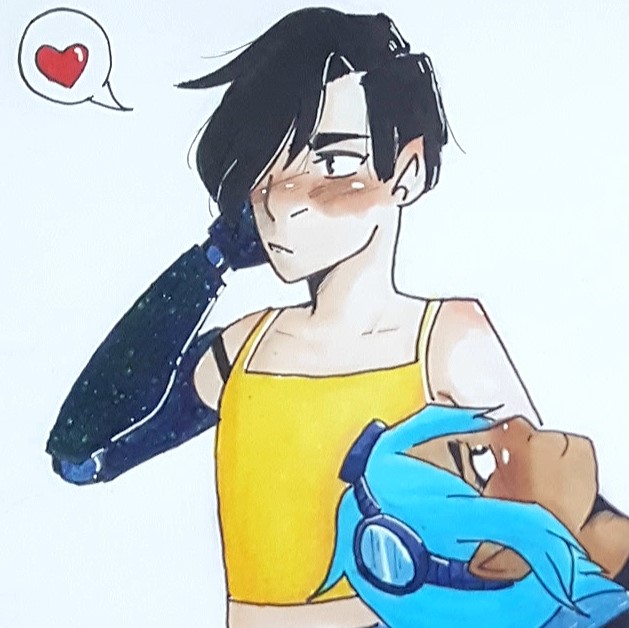 Lucius, with Ever resting on his lap. Art by SolarEspeon. 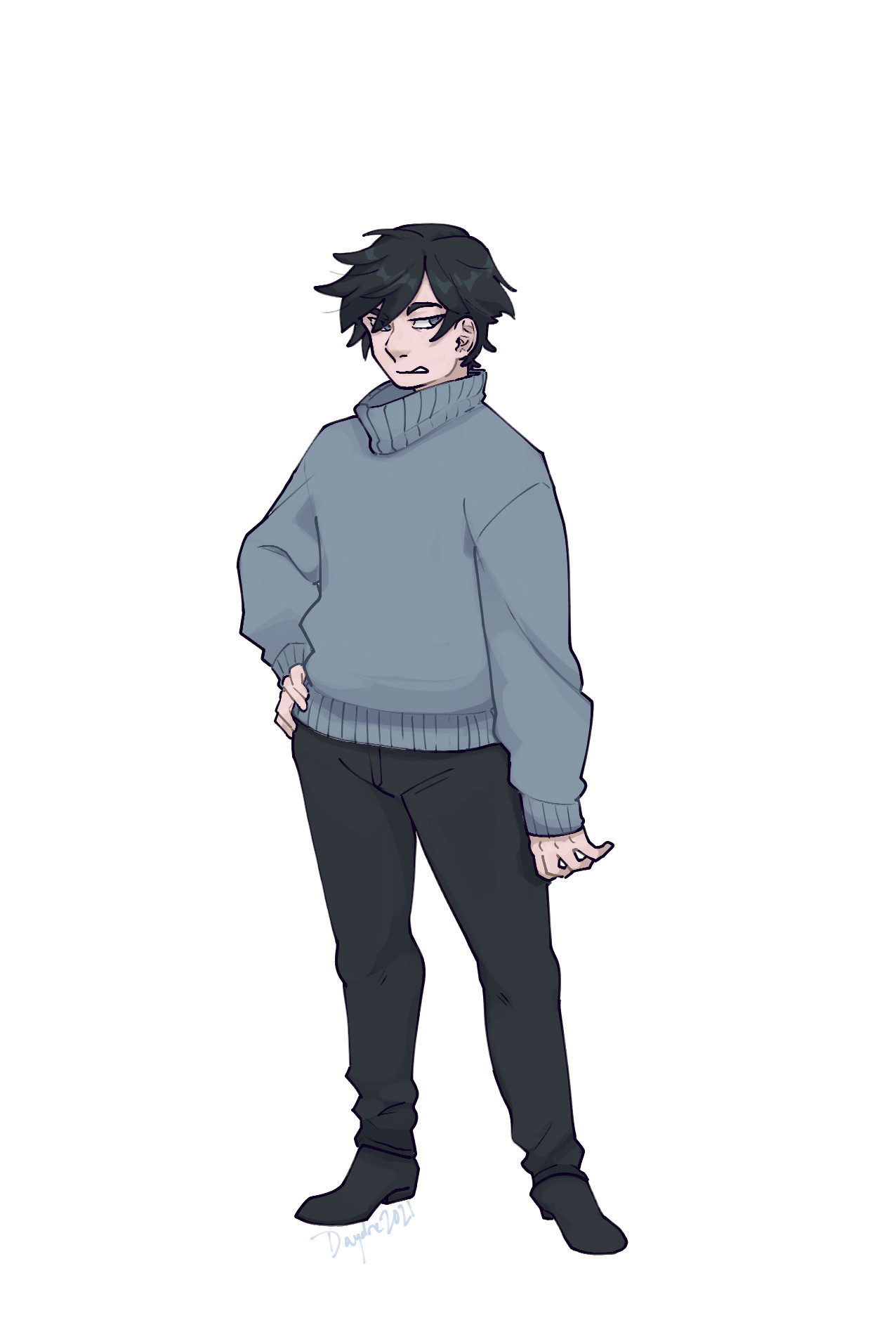 Lucius during the Orre Arc. Art by Daydre.

Lucius Augustus Octavius Cain (mostly known as Herbert prior to the Ranger-2 arc) is the primary PC of Herbert40k.

Lucius (nicknamed Bert by Crow, Herby by Kai, Princess Luciana by Lyuri, Octave by Lanie, Lucy by Ammy and Fruitcake by Crewe) is a Pokemon Trainer and Obscuric hailing from Eterna City who started travelling with the J-Team in Virbank City. He is antisocial, judgmental and generally kind of a jerk, though once he manages to befriend people he becomes rather more personable. He tends to become flustered during awkward or uncomfortable situations. His upbringing caused him to view Pokemon as little more than animals, though he has since corrected these views. He is also prone to violent and emotional outbursts at minimal provocation.

He is Titan's son, a direct descendant of Lucanus and Aiura, and a first cousin of Psyche.

Lucius was born and raised in Eterna City, Sinnoh. His parents split when he was very young, leaving his father, Titan - a devoted Team Galactic commander - to raise him. Lucius loved the style and charm of the team when he was young, and his father often brought home Pokemon they had "acquired" for him to play with. However, on his ninth birthday, his childhood friend Alice convinced him to sneak into the Team Galactic labs, and there he saw the full extent of the twisted experiments his father had been conducting. The incident gave him a crippling fear of laboratories and scientists, which he carried for most of his teenage years.

At around the same time, he was given his starter, Kirk, and one of his father's Abras whom he named Maul. When Lucius was 11, Team Galactic was taken down by a trainer by the name of DS, and his father disappeared a week before the confrontation at Spear Pillar. Lucius vowed to find him and put a stop to his plans, visiting and beating five of Sinnoh's gyms and catching a Sneasel he named Ripley before taking his search abroad. He spent four years searching Orre, Almia and Kanto, catching a Shadow Scyther named Bishop whom he later purified along the way, before travelling to Unova and meeting the J-Team in Virbank City.

Lucius acquainted himself with the group just in time for April Fool's Day 2013, during which he was transformed into a four-year old and took on Newfie as a surrogate parent. After he had returned to normal, he met a genderbent Eskay and, failing to recognise her, attempted to ask her out. He was rejected, and learnt of his embarrassing mistake in a later conversation with Skye. Whilst he was in Virbank, Lucius starred in a movie called From Space With Love alongside Eskay, Jacob, Sakura and Rawst, and decided to tag along with the J-Team for a while longer afterwards.

Whilst traveling to Driftveil, Lucius saw the then-human Duke use an Aura Sphere to defeat a wild Pokemon, and eagerly asked to learn how to use Aura himself. Through Duke's training, Lucius discovered that he was Aura-sensitive, though his abilities were highly limited. Upon reaching Black City, Lucius reunited with Alice, and learnt that Titan's right-hand man, Deimos, was operating within the city. The two defeated him with help from the J-Team, despite their efforts being interrupted by an unexpected attack from Jet, and Zeal and Eskay getting injured during the fight. However, Deimos was able to break free with Titan's help, and again encountered the group in Driftveil.

Later on, Lucius found himself harassed by Edge, a Bisharp with a grudge against his family who kidnapped Carol to bait him. He confronted and managed to slay Edge shortly afterwards, but the act of killing left him haunted by guilt. He went on to challenge the Unova League, but was defeated by Iris, leaving him dejected. Titan approached him under the guise of comforting him, but used the opportunity to steal Lucius's dream rift sealing machine.

Lucius accompanied the rest of the J-Team to Holon, but almost as soon as he arrived he was transported back 600 years in the past to feudal Ransei alongside Tagg and Ammy. Forced into a race to defeat the Demon Generals in the midst of region-wide war, Lucius found himself fighting for survival and his resolve to never kill again severely tested. It was during this arc that he had his first run-in with one of the Auric Artifacts, namely the Orange Amulet.

During the battle with Ninetails, Lucius was hit by a Flamethrower that would have left him permanently scarred were it not for the Amulet's regenerative properties. He went on to meet his ancestors Lucanus and Aiura, but as Ammy's quest continued he became increasingly corrupted by the Amulet, to the point where he had to be restrained from killing Umbra and Secant after defeating them.

Upon returning to the present, Lucius learnt that Kirk had disappeared. Rather than tell him the truth - that Kirk had become disillusioned with Lucius as a trainer - Bishop told him that Kirk had been snagged by Cipher, giving him motivation to travel to Orre with the rest of the group.

After Duke was snagged by Alexiel, Lucius pledged to help Sakura and Lyuri rescue him. However, soon after arrival he was assaulted and nearly killed by a masked girl known as Alexia and Shadow!Duke, only surviving thanks to the Amulet. Alexia continued to harass Lucius, stealing the Amulet to give to Alexiel and nearly snagging Bishop before he and Sakura were able to corner her in Pyrite Town. Lucius successfully snagged Duke, causing Alexia to reveal that she was in fact a blackmailed Lyuri.

Upon learning the truth, Lucius went off the deep end. Sakura had to hold him back from nearly killing Lyuri, and afterwards he was left deeply paranoid and violent. He assaulted Tiara!Ever and ordered Shadow!Duke to brutally maim Verax, only stopping when Bishop revealed that Verax had nothing to do with Kirk's disappearance. Though Lucius was able to purify Duke and retrieve the Amulet, Alexiel escaped, and the events of the arc left him deeply traumatised. Maul therefore elected to toss the Amulet in Cinnibar Volcano to prevent it causing any further damage.

In Kalos, Lucius reunited with Kirk, who had been enslaved by a Malamar named Teacher using another Auric Artifact, the Black Chalice. However, he was still haunted by the events of Orre and unable to reconnect with the rest of the J-Team, nor was he able to forgive Tagg for the Very Bad Thing. At some point during the arc, he returned to Unova with Sarah, where they may or may not have had a romantic encounter.

Lucius returned in the Ranger Regions, he and Alice having reinvented themselves as superheroes and dedicated themselves to destroying Team Neo-Galactic. They were successful in drawing several of the J-Team to their cause, but Lucius's growing obsession with bringing his father to justice caused him to abuse his power, treating the other superheroes as his own personal army. They were ultimately able to capture Titan during a raid on Neo-Galactic HQ, but it left Omega crippled and Lucius abandoned by his fellow heroes.

Angry and directionless, Lucius was recruited by Sol and Ton to steal the Gaim Rahm from PEFE's Fiore branch. He succeeded, but upon learning that their employer was a Space Ampharos, he freaked out and turned himself over to PEFE. His trial was held concurrently with Titan's, and he was sentenced to community service. Upon his release, however, he and Alice were kidnapped by Abel and S and murdered as retribution for the J-Team's actions in Orre.

Due to the anticlimactic and narratively unfulfilling nature of Lucius's and Alice's deaths, the J-Team were able to strike a bargain with Yveltal to bring them back to life, offering Abel and Grohl's souls in exchange for Lucius and Alice being resurrected as ghosts. Following his resurrection, Lucius entered a brief relationship with Keiran, but this fell apart when Keiran came into possession of the Purple Sword and used it to puppeteer Lucius's body. As a result, Lucius once again left the team for a while.

Lucius spent much of the intervening time between arcs caring for his father until he finally passed away, whereupon he traveled to Alola and reunited with several members of the J-Team just after the Mobius Society broke the multiverse.

Lucius ended up dying in the AU when he insulted some Scolemis goons, stating that Pokémon were too dumb to rule the world, leading to his death by Scolipede.

As a result of his bad attitude, severe trust issues and tendency to hold grudges over even minor issues, Lucius has few friends amongst the J-Team. He shows a much kinder and more loyal side towards those he is able to befriend, however.

Like most other members of the Cain family, Lucius has short black hair, grey eyes, high cheekbones and a pointed nose. His usual outfit is a thick, baggy grey sweater and trousers, with black gloves, boots and a scarf. He also owns a pink dress, which he kept after being made to wear it for a day by Ammy.

As of the Entralink arc, he is missing his right arm from the bicep down after it was shattered by Shard.