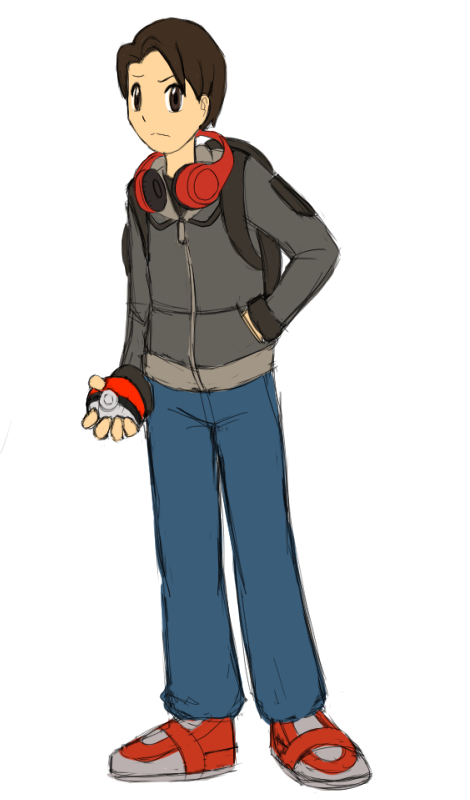 Colton in his trademark gray jacket, as drawn by SapphireLuna. 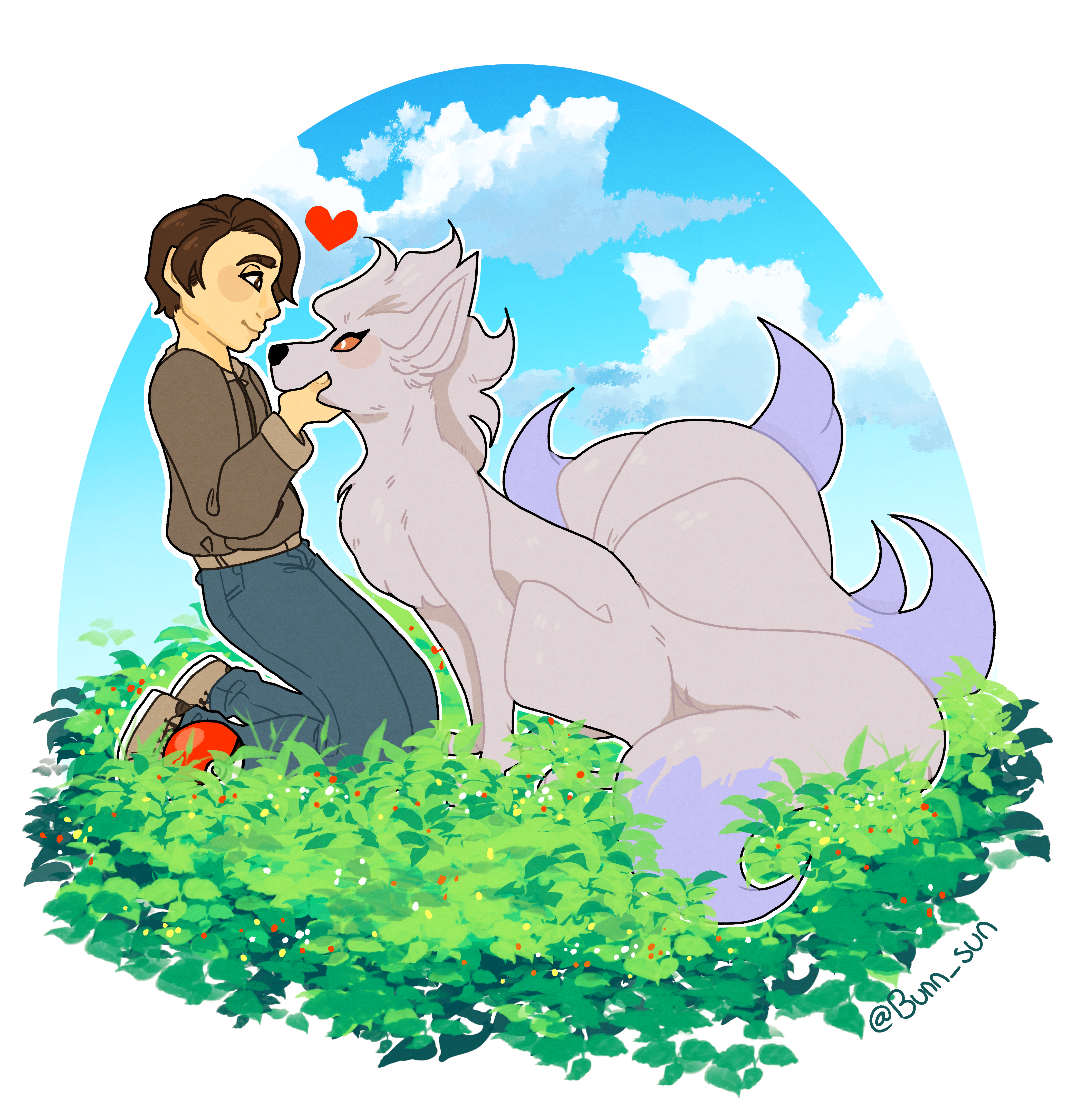 Colton Kendall Rever is a Unovan, age 22 as of 2017. He wears a light gray jacket, in that the jacket is light. He carries his items in either his laptop bag or his backpack, such as a TM case, his phone, and his Pokeballs. His hair is relatively unkempt, which mirrors the persistent uninterested look in his eyes. His sneakers possess red soles and gray everything else.

Colton worked for Game Freak’s branch in Unova, as both a debugger and a as a representative.

However, after spending seven years living frugally, he had developed enough income to comfortably leave his old job and live on the Stormchaser, still doing some small amount of work for his old boss as freelance and eventually being sponsored by them for the Galar League.

Colton's personality has been described by both himself and his Pokémon as "the kind of person you have to learn to like". A sense of humor and street smarts are greatly present, but he has a bit of a time knowing when to stop.

He doesn't quite show his Pokemon the same amount of affection as other trainers. Rather, he instead treats them with respect; as friends rather than pets. As an extension, he's somewhat tired of trainers being credited and not the 'mons.

Having been “raised by machines”, he’s rather inconsiderate. He's a little too blunt, can't really put much of a lid on his dry wit, and it doesn't help much he comes from Castelia City. The dark side intersperses with the idyllic city most see on the travel guides.

He also doesn't exactly have much when it comes to relations, which compounds the matter. Yes, he has his family and his Pokémon, but really, that's about it. He keeps to himself, and he prefers the world do the same.

Born and raised in Castelia City, Colton spent most of his early years holed up in his parents’ apartment complex. His father worked somewhere, but the specifics are currently unknown. What is known is that one year before the events of Black and White, his father was fired from his job, since his workplace was occupied by Team Plasma.

Without a job, they were forced to move to Accumula Town. With his parents only now noticing his fatigue and self-imposed isolation, they arranged a meeting with Professor Juniper to give Colton a Pokemon of his own. It was decided he was to be given an Oshawott.

One year later - several days of which spent bedridden due to said Oshawott constantly throwing his scalchop at Colton’s head - Team Plasma made that speech in Accumula. Watching from the window, Colton and Oshawott held equal disdain.

One week later, after much preparation, including finding and catching a Lillipup who lived nearby, Colton left on his journey. He was given an Eevee upon trying out trade. He caught a Joltik responsible for a power failure in Castelia, as well as being rewarded with a Vulpix egg for fixing it. Upon leaving Castelia, he rescued a Riolu from a trainer who was less abusive and more obsessive and stupid.

After beating his 8th gym, he saw on the news that Team Plasma was defeated. Bitter, he returned to Castelia and got a job at Game Freak. He has been called in for business trips, including one to Alola, where he first met Soujin after an encounter with Quirinus.

After said encounter with Soujin and Quirinus, Colton made his way to Route 16 after overhearing a scream. He was shortly after introduced to Pokeforms, where he attained his own. After a night screwing around in said form, he found himself getting involved with Anabel and a search for an Ultra Wormhole. The search turned up fruitless, but their group - sans Anabel - was ambushed by 817.

After shaking off the Xurkitree, he was brought to Aether Paradise. He blacked out in the chopper, waking up to find Gladion’s Silvally near the chopper. He spent some time with him before being escorted back to Ula’Ula Island. Upon remembering he had a Ride Pager, he returned to Aether Paradise, where Hephaestus was now attacking.

After Elagabalus was defeated, Colton once again returned to Malie, only to notice a U.F.O. on the other end of the Island. This somehow led to him attending a wedding in the PMD-A Universe.

Upon returning, he was close enough to see Hokulani Observatory getting ambushed by a Nihilego. He flew over, but knew he probably would not be able to help. He disembarked a short distance down, and that was where he met the first ‘mon he caught in over five years - Rei.

Upon making it to the observatory and learning of what the Bronze Birds and Auric Avenger were, he somehow made it to Poni Island, eventually catching sight of a bunch of Legendaries around a machine. Curious, he got involved and found a friend in Mahina.

After he felt he outlived his reason for being there and getting some food at Seafolk, he left for Mahie City so he could hopefully remember which challenges he had completed. Upon entering the Library, he was sidetracked by hearing that a poker game was going on with Ever, Squealer and Muninn. Halfway through the first hand, he overheard Mew Prime talking about Pokeforms. Having wanted his to evolve since he got it, he engaged, being reflexively transformed after catching her out. Then they sparred. Sylveon took over his seat at the table while Colton and Prime fought.

After a particularly brutal Stone Edge attack, Prime conceded and Colton evolved into a Midday Lycanroc, but not quite right. Satisfied, he left the Library with Sylveon to resume his Island Challenge, retrieving his Z-Crystals from Alola's Game Freak office to learn that the Rock Trial was next. However, Olivia was actually at the Pokemon League instead, so Colton had to leave the Trial Site to the League to confront her.

After finally finding Olivia, he decided to continue his Island Trial, but was interrupted when everyone was invited to the Halloween Party.

There he met up with Pent and Mew Prime while they were discussing the Illusion Project and thus joined their team. After starting their search on Pent's pen, Mew offered to take Colton to the next Trial in exchange for a few favors. Said favor was dealing with a feud between Melemele Island's Rockruffs and Meowths. This was addressed at the same time that Lucario and Sylveon finished the Electric Trial for him.

After also getting the Ghost and Bug Trials done, followed by defeating Nanu, he wound up in Ersatz Alliance, only then deciding it would be worth fixing the Entralink.

When he was spat out at home and explained to his boss that the Entralink might have been sabotaged, he was sent to fix it, but he soon realized there was no 'mon on his team with Fly. With that he put the task on the backburner and went to confront the Pokemon League. After winning, he joined the Best Berry Raid.

Sometime later he also got involved in the Saffron City Templar Raid, freeing the captive 'mons and soon being joined by both a Natu and a Fennekin.

Post-raid, he wandered around a bit before leaving for Ren's Christmas Party, leaving with a Pyukumuku egg and Ilya's phone number. A few days later, the egg hatched and he decided to walk around Castelia a little more, encountering a Zoroark and Geodude on a Library Balcony. With nothing better to do, he accompanied the Zoroark home to Relic Castle before realizing they left a bookbag behind. They went to retreive it, soon being found by Colton's Legendary Facepalm removing some sand covering it. In thanks, he was offered frozen yogurt.

Watching the New Years' Celebration, he ultimately decided to travel the world a little bit more. After his preparation he was alterted that Alli had been last seen in Lostlorn Forest. Recalling he originally conveyed the message from Muninn, he joined in on the raid, but not before Sunny evolved.

In the Yangverse, where Alli had fled to, he found a Torchic who he quickly found out was Roy from Fire Emblem: Binding Blade, taking him in. When the group recovered Alli and returned home - dropped off in Mauville - he then decided to do Hoenn's League. After he won, he returned home before being teleported by Xatu to the Stormchaser for a party, eventually getting some new clothes in Ersatz and returning home again to learn that Gudrunn - having been corrupted ever since the Hyul Arc - had taken another Auric Artifact.

He joined up with a group in Pinwheel Forest to confront this matter, capturing a Whismur/Rabbid counterpart of himself he called Kazuma. Some time prior to that, he was kidnapped by Team Iron and rescued within a few hours. Having been brought to Alola, he figured it was as good a time as any to finish up the League.

After defeating Lusamine, who was in the position at the time, he went with the team to Kalos, shot the breeze with Silas and Yunwa, including introducing the latter to music and movies in exchange for giving his recently caught Kartana weremonism, and decided to go to the moon with Silas because he had nothing better to do.

After finding the group trapped in the building, Colton was the first one to advance the story by finding some old media player and a key. After meeting with Terry and Petey, he was the first to engage Lena. After his methods backfired and the fleed, the group encountered Walt, who revealed that Colton actually possesses an affinity for Obscura.

After they retrieved Sam's voice, Colton left with the Darkrai to shut down the generator - and try for the first time to channel Obscura. It didn't take, but they were able to defeat Jester regardless. With all of that addressed, Colton raced Pent to Walt's magic pen, only to be warned by Pent only a skilled Obscuric could handle it. He relented, but was given the Prax Obscura to refine his fledgling Obscuric capabilities as consolation. And a robotic arm, but that was more a trophy for the group's victory over one of the monsters than anything else.

Colton and a selection of his team star in the storyline of hist/Sabres in the Sandstone[㏜], where he and his team are visiting Suocé and get to fight the local Guardian Force Cobalion. The event takes place sometime in the Suocéverse chronology shortly after Generation V.