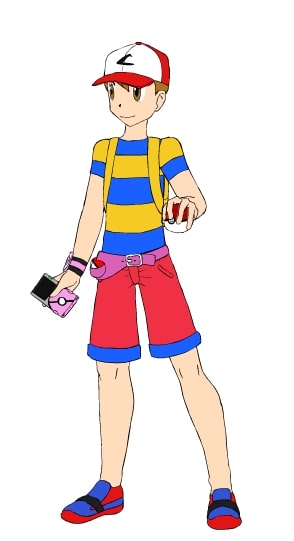 Ian in his usual clothing.

Ian is a Pokémon Trainer from the Unova Region who is always looking for adventure. He's an unofficial member of the legendary J-Team. His goal is to be the greatest Pokémon Trainer that he can be.

Ian is a kid with dirty blonde hair and hazel eyes. He was 4'11" tall (currently, he is 5'04"), likes to wear striped shirts (usually with blue stripes) and shorts, because they're comfy and easy to wear and he often wears red sneakers. 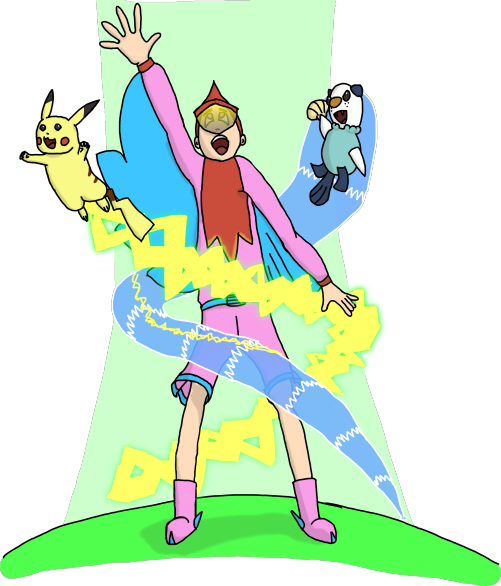 Ian in his Birdstyle, sewn all by himself.

When Ian raises the arm his Xtransceiver is on and shouts the phrase "Bird Go!", he transforms, in a flash of light, into his superhero-in-training form, Ian the Pikipek. Ian sewed the costume himself using fabric he bought from Ersatz Alliance, in pink, red and blue sewed together with Kevlar due to its protective properties. The costume comes with a cape made to look like a bird's wings when opened and a helmet with a gold-tinted visor designed to look like a Pikipek's beak. 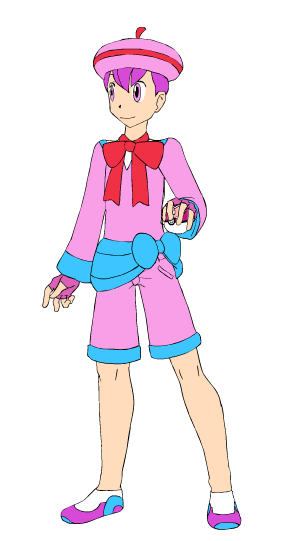 Ian in his Magical Boy attire, sewn all by himself.

When Ian presses the heart-shaped button in the middle of his Sparkle Tap and shouts the phrase "Loving Melody Charge!", he transforms, in a flash of light and a storm of flower petals, into a Magical Boy. His hair and eyes both turn pink as he puts on a pink beret-like hat, a red ribbon, a bright blue sash around his waist, and a pink Magical uniform. Like with his Ian the Pikipek form, he sewed the costume himself using fabric he bought from Ersatz Alliance. He designed the costume with cuteness and fighting evil in mind.

Ian is an optimistic and fun-loving child who is also a bit of a prankster. He has a bit of a sweet tooth and is always seeking new adventures.

Born and raised in Nuvema Town, Ian was always kind and caring towards other people and Pokémon. His philosophy was "Always be Kind to those around you, and you can't go wrong!" Ian also loved to explore. He was always proud of his sense of adventure.

One day at Pokémon Trainer School, Ian and his class were all assigned their own Pokémon Egg to tend to and raise until it's time for them to set out on their journey. Ian took his Egg home with him and cared for it every day as best as he could. When the Egg hatched, Ian and his family were the first to see it. Ian's Pokémon Egg hatched into an adorable Pichu, which Ian nicknamed Piku-chan. Ian had cared for the young Piku-chan since then, protecting him from those who would do him harm.

One day, on a trip to the Kanto Region, between the events of the Kalos Arc and the events of the Ranger-2 Arc (About age 8), he made some new friends, and on a dare, he snuck in to Team Rocket's Headquarters. After a few minutes of sneaking around, he was spotted by one of the Team Rocket Grunts, who went over to see who was there. Upon seeing that it was Ian, the Grunt grabbed him by the arm, causing the young trainer to panic. Ian then kicked the Grunt in the groin, causing the Grunt to let go, giving Ian his chance to escape. "Note to self: When someone dares you to sneak in to an evil organization's headquarters, just say no." He told himself immediately after the stunt.

When he turned 10, he received his Starter Pokémon from Professor Juniper, an Oshawott. Ian's mother suggested that Ian nickname the Oshawott "Oshawittle", which he did. He then took Piku-chan, whom, thanks to Ian's friendship and care, had evolved into a Pikachu, with him, received his Pokédex and started his adventure!

After he defeated the Castelia City Gym, his Mother gave Ian a Pokémon Egg that she found, of which Ian accepted. Like with the Egg that contained Piku-chan, he cared for the Egg as best as he could until it hatched into a Larvesta, which was considered to be a rare Pokémon. Ian then named the Larvesta "Mothra", after one of his favorite movie monsters, who had been known to care for all life in the Pokémon World and wouldn't hesitate to attack those who would threaten the World or her family.

On his way to Opelucid City, he ran into a wild Ralts. Ian could tell that the Pokémon was very shy and tried to calm it down. The Ralts took a liking to him and began following Ian. Ian then gave the Ralts one of his Poké Balls, which the Ralts happily climbed into. Ian then nicknamed the Ralts "Raru".

Ian made his debut in We Are All Pokémon Trainers: Page 21981, where he walks into Celadon City's Pokémon Center while contemplating the mysteries of a boot he won from a Team Rocket Grunt during his Sign-Up Test, when suddenly he passes by Nana Ikaika, a Punk Girl sitting on a bench eating banana nut muffins. He then does a double-take to say hello. After Ian and Nana put their Xtransceiver numbers into each other's Xtransceivers, Ian heads off to find his next adventure, as if winning a boot from a Team Rocket Grunt wasn't crazy enough...

In his and Evelyn's care

Some relevant items that Ian owns are...