She's... crazy! In kinda good sense, though. I mean, who's sane to tickle you and make both you and herself roll into a wall... just enough to make your friend tease with the... situation. You should keep her under the belt, though. What if she'll sent me far away with her pillow jutsu?! 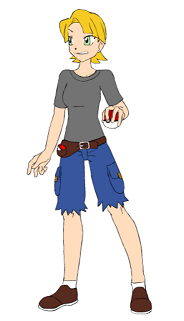 Tori is a fun-loving free spirit who love to make a joke out of nearly anything. Although her preferred methods of showing affection include teasing or comical violence, she genuinely cares for her friends and does have sweet side.

Raised with Blitz at the Thorne family Daycare on Route 117, she spent most of her life there helping with various tasks. Has been planning to set out as a Pokemon trainer after Blitz returned from his vacation, but discovers going home is a little more complicated when your brother has fallen in with the J-team.

First appeared in Kalos to accompany Blitz home to Hoenn.

Ended up going to the Ranger regions with Blitz due to shenanigans, and after meeting several members started following the J-team on their travels. In part to try and keep an eye on Blitz.

Spend most of the Hoenn arc alternating between visiting with her family, hanging out with the J-team and getting closer to Lane and Ignia. Received a Mind badge while helping Lane in a double gym battle with the Mossdeep leaders.

Was briefly kidnapped, along with Ignia, as part of a ploy to get Lane and Maria back under their parent's control. But was able to escape in time to turn the tables.

In Sinnoh, Tori was roped into helping repair Psyche's mindscape. And later hospitalized for a knife slash during a foiled assassination attempt targeting Lane. She made a full recovery.