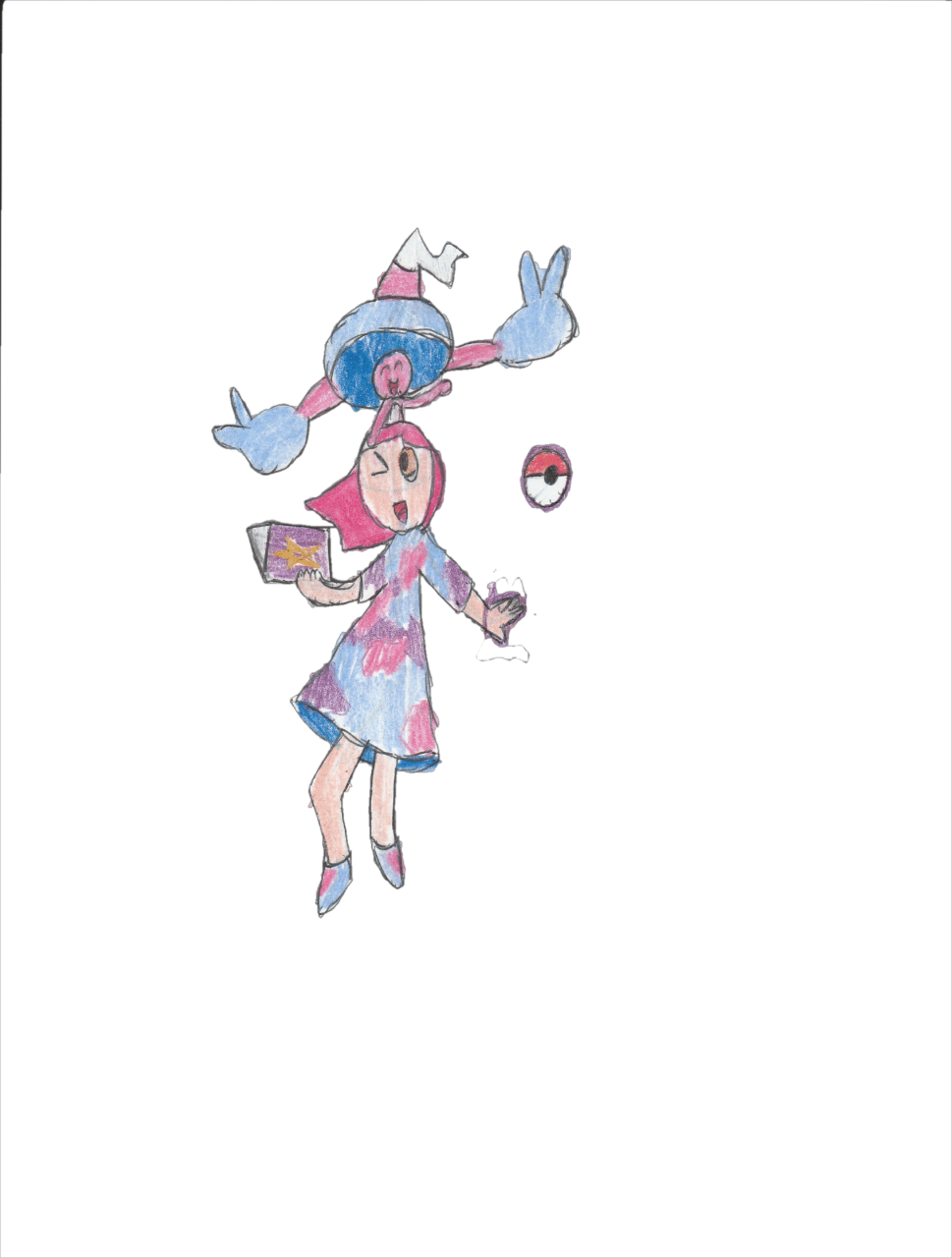 Evelyn in her usual attire with her best friend Hatty on her head.

Evelyn (Full name: Evelyn Sapphira Promeneau) is a Pokémon Trainer from the Galar Region who always seems to have her head in the clouds. She's an unofficial member of the legendary J-Team. Her goal is to become a great Psychic-type Gym Leader like her mentor, Sabrina.

Evelyn likes to wear robes and kimono in colors like pink, blue and purple along with soft shoes. She stands at 5'09" with deep brown eyes (like her father's) and pink hair (unlike either of her parents). On her head, she likes to wear her favorite pink and blue witch's hat... which is actually her best friend and starter Pokémon Hatty.

Evelyn is a kind-hearted girl who always seems to see the world as if it were upside-down, which, as her parents would muse to themselves, was "an unusual viewpoint for an unusual girl".

Evelyn had lived in Ballonlea for as long as she could remember and was always able to make new friends there. She and her friends would often play in the Glimwood Tangle nearby; climbing trees, sword-fighting with sticks, pranking the Impidimps, it was great! One day, when Evelyn was eight years old, she heard a quiet, but clearly sad Pokémon cry in the Tangle and went off to look for the source. When she found it, it turned out that the cry was coming from a Hatenna who was injured and separated from her coven. Concerned for the little Psychic-type, Evelyn picked her up and brought her back to Ballonlea with her. When the little Hatenna thanked Evelyn, that was when Evelyn discovered what set her apart from the other children: She could communicate with people and Pokémon mentally! She spent the next two years practicing her Telepathy and the other Psychic abilities that were to follow. In that time, Evelyn developed a more witch-like persona, and at the age of 10, she took the little Hatenna, whom she had nursed back to health and nicknamed "Hatty", with her on her Pokémon Journey. As their journey progressed, Hatty evolved into a Hattrem, and it became easier for Hatty to ride on Evelyn's head. She had also hatched twin Ralts, one male one female, which she named Kako (the boy) and Mirai (the girl), for the Japanese words for "past" and "future". Eventually, Evelyn decided to take her journey to the Kanto Region, where she would meet with the Saffron City Gym Leader, Sabrina. Evelyn then asks Sabrina if she can train at her gym, to which Sabrina answered yes. During Evelyn's training, Sabrina had given her an Abra as a gift. Evelyn named the Abra Axon, who had eventually become an Alakazam during their intense training. Eventually, Evelyn would come across a Hypno which she made eye contact with... This caused Hatty to facepalm and the Hypno to prepare his psionic attack. However, as the pendulum swung back and forth, instead of hypnotizing Evelyn, it created a telepathic link between them, allowing both Evelyn and the Hypno to understand each other and quickly become good friends. The Hypno became known as Simon, and Evelyn had went off to continue her journey...

In hers and Ian's care

Some relevant items that Evelyn owns are...