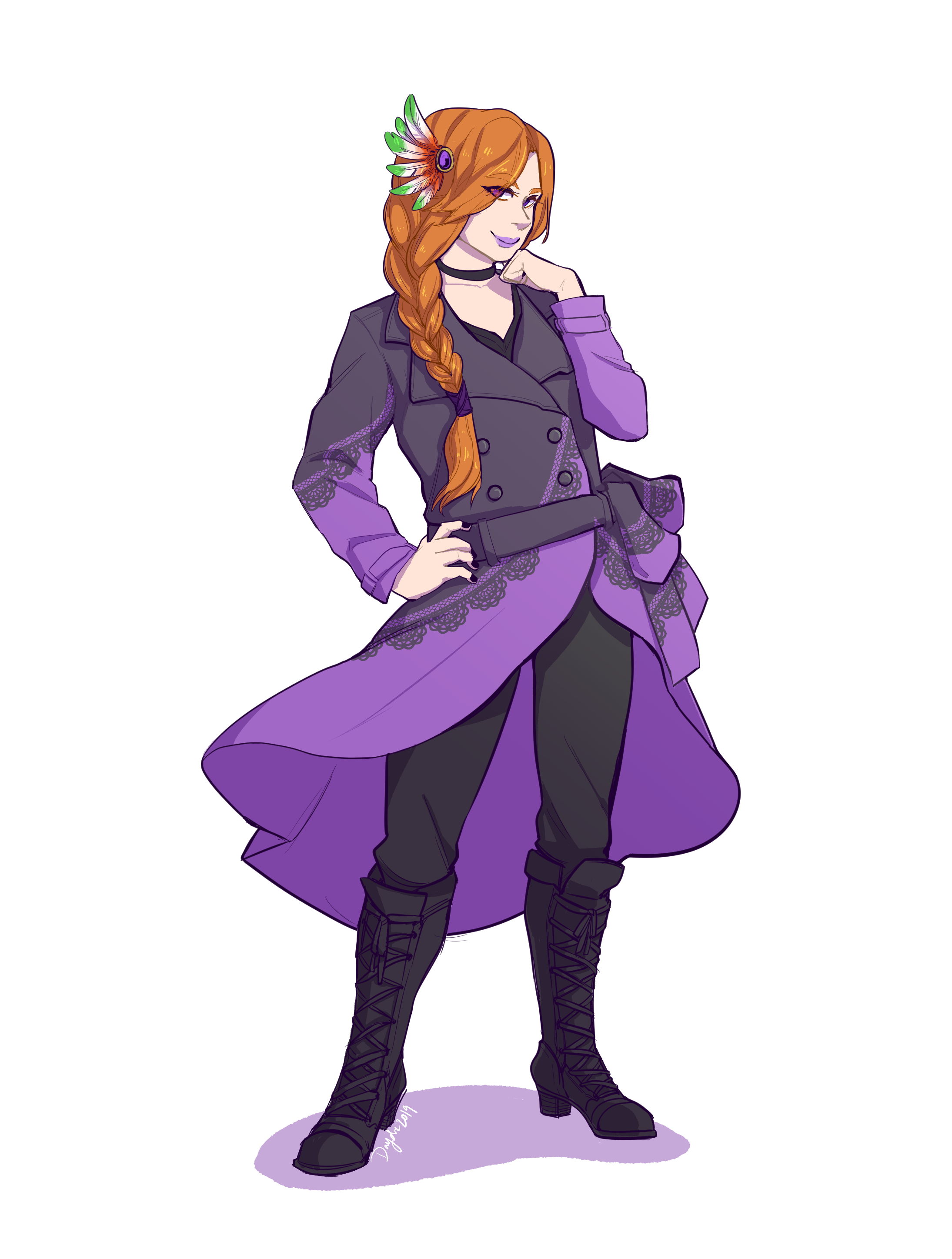 Frontier Brain Kai Amarin is the first PC of BittersweetNSour. They have a number of alternate names and identities, notably that of Rogue of the Aurabolts.

Kai was born to Ivory Ellen Amarin and Dylan Jameson -- who would later separate after their younger sister, Alli, was born. For the first ten years of their life, they and Alli lived like any other kids, going to school while preparing to become Trainers early through teaching from their mother. Kai's starter, a Skarmory named Skye, entered their life when she was found with a broken leg near Ecruteak City, and their next Pokémon -- Jazz, a shiny Ekans (now Arbok) -- was found near Vermillion City, during the family's first time exploring the other side of Kanjoh.

In 2007, Ellen was attacked and killed by a Toxicroak. Although in the aftermath they were given the opportunity to live with their grandmother, they instead chose to try their best to live on their own as Trainers after Alli received her starter from Lance. In the following years, the siblings caught a couple more Pokémon -- in Kai's case, he caught Amphibidax and Kong Ria and Banjo, as well as a Houndour named Tartarus, who later ran away due to disagreement on the whole concept of Pokémon training.

Kai is 5'9", pale-skinned, androgynous, and has amethyst-purple eyes. Their natural hair color is brown, but they began dyeing it red after the Kalos arc. On their chest is a large diagonal scar, originating from a combination of a Toxicroak attack during the Holon Arc, and being impaled by the Transistor in Psyche's Mindscape; a similar, smaller scar is visible on their back from the latter as well. Although most of the internal damage from both healed, Kai still has heart problems; as such, although they used to have a fairly athletic build, they have not been able to maintain it since these two events, and are now somewhat less fit than they used to be. They also have scars along the left side of their neck and face from a number of incidents -- namely, being strangled by Carmilla and Livius on multiple occasions, as well as being blasted by shrapnel from an exploding axe during a fight with a Molybdenum-controlled Megan.

As revealed in a conversation at the end of December 2017, Kai looked up to Pentigan when the J-Team first became famous, and took aesthetic inspiration from him -- in particular, wearing a long black coat and hat over an otherwise plain gray shirt and jeans. After a number of assorted outfit changes, they eventually chose an updated version of their original look, with purple accents (as depicted above). They've also been straying somewhat toward a goth aesthetic, wearing thicker eyeliner and black lipstick (although no updated art has been made since this decision).

Kai is generally friendly to a fault, to friends or to strangers. They have somewhat of a flirtatious streak, especially with people who are easily flustered. When the opportunity arises, they also have a flair for the dramatic. They are, however, very self-conscious about other people's perception of them, and crack under pressure fairly easily, due to their anxiety disorder.

As a Trainer, Kai utilizes a broad variety of Pokemon with a similarly broad selection of moves. They tend to assess situations quickly and immediately seek out a way to debilitate their opponent's primary method of attack, requiring them to rely on alternate tactics or weaker versions of their abilities.

Kai is a classical Auric, inherited from their father's side; initially, the intersection between their father's classical Aura and their mother's Spectral Obscura left them without any such abilities, but the change of their Pokeform from Noctowl to Toxicroak gave them a greater affinity for the Fighting-type side of her potential.

In particular, Kai's expertise is centered around the transfer of Aura to or from themself and others. They primarily fight through Aura Drain in the form of Drain Punch, though they can also channel it through tools such as staves or chains as long as they provide a physical connection to their target. After their final fight with Carmilla, the instability of their Aura from particularly quick Aura loss and recovery developed into full vampiric dependency.

Since their turning into an Aura Vampire, they are constantly, visibly radiating a rainbow Aura by default, though they can make an active effort to contain it when necessary. They can flare up their Aura and expend it in visibly explosive bursts to get temporary enhancements in speed and reflexes, allowing for several attacks in quick succession. They can also, when emotionally riled up enough, generate searing heat through their attacks, giving them a subtle

sub-element. They are also working on developing an ability to blend their personal Aura into the ambient Aura of the world, concealing them from Aura Sense; however, thus far it has not been perfected, and similarly generates significant heat around their body.

In addition to their prowess as a trainer and their Auric ability, Kai is also a Heart of Gold, and discovered the attribute's empathic abilities first among the J-Team, in particular the empathic resonance of Goldvoice. They prefer not to lean too heavily on this ability, though, preferring to save it for helping to calm their friends down when distressed. In times of extreme duress, Kai's empathic abilities and Goldvoice create an area of uncontrollable empathic feedback.

The AU version of Kai is currently in a retcon-induced limbo. The retcon in question has yet to be clarified.

Rather than Kai adopting Skye, Ivy did. It wasn't until they found Jazz when they caught their first Pokemon. Due to her shininess, Kai believed they were meant to be a Poison-Monotype Trainer, much like how their mom was a Steel-Monotype Trainer. Eventually, Skye fended off the Toxicroak which would have killed her in the OU and AU - but she was still poisoned by it, and was in the hospital when Alli received her first mon. The incident left them with a similar phobia of Toxicroak, but not nearly as crippling as in other 'verses.

In one universe, the events of the Orre Arc took a different turn. As a result, Kai (narratively known as "Kai Alter", or simply "Kalter") became a leader figure among a more aggressive, Knight Templar-esque faction of the J-Team, which took the name J-Dan. Kai's abilities as a Heart of Gold formed an empathic feedback loop, drawing in similarly emotionally volatile allies and leading them in a revenge-driven campaign against Cipher, which led to them fighting against other eventual villains with the same sort of ruthlessness.

At some point, Ho-oh came to confiscate Kai's Rainbow Wing, but another of their enemies took the opportunity to catch Ho-oh off guard and kill him. Nix joined Kai to seek revenge on her father's killer; her plumage turned dark in the process, and she changed her name to Nyx.

The following Pokemon have either been released, or left in the care of PEFE or another trainer.