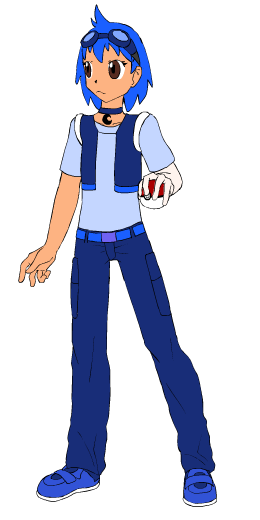 Ever (full name Ever Memito and formerly Every Memito) is a more or less completely random trainer, hailing from Nimbasa. They joined the group at the Gold Conference, meeting and talking to them many times before eventually deciding to travel with them...or the J-team deciding to take them along, whichever. Even they're not entirely sure. Since joining the group, Ever has met legendaries, been turned into a Dunsparce, sucked into an alternate universe, fallen in love, been immobilized for extended periods of time twice, missed a mutagenic Charizard party, and experienced a short stint as a member of the New Team Aqua.

Ever spent the beginning of this arc searching for tears in the Mesprit area of Sinnoh, and later helped with Azelf's tears. After eastern Sinnoh was cleared of Twilight, however, Ever spent the remainder of the arc in Sunyshore, helping Fortis start her career as a trainer. At one point in the arc, they challenged the Sinnoh Elite 4, and while they reached Lucian, they lost in the end.

Ever was one of the earlier entrants into the PMD world, and was turned into a Dunsparce. While they spent most of their time there helping Magolor replace the parts of his ship, between White Wafers and Nutty Noon they and their team assisted in keeping Toxicroak, Fade, and Gyru from taking control over the fourth wall.

Ever's goal during this arc was to complete the Johto League. They completed the Gyms and reached Lance, but were defeated by Lance's Dragonite.

In addition to this, Ever participated in the final two levels of the Return to Dream Land arc, and fought All and Lily several times.

At the end of Kanjoh-2, Ever was teleported to Unova after Lily attempted to kidnap Mezzo.

Once again, Ever's goal here was to complete the Unova League. For the first time in their life, they managed to defeat the champion.

Ever was not active in Holon.

While in Gateon Port, Ever was taken captive by a Cipher Peon, and brainwashed into serving Cipher. They spent most of the arc under Cipher control, where their achievements include the snagging of Maekrite.

Towards the end of the arc, they were reclaimed by Mezzo, Lily, and Ryklys, and assisted in the final raid against Cipher, where they battled and nearly defeated a Latios using the flyers on their team.

Shortly thereafter, they ran into All and had a battle with him, afterwards changing their name from Every to Ever and altering their appearance substantially.

Feeling like they needed a fresh start upon arriving in Kalos, Ever boxed their team, with the exception of Skoll, and caught a new team to take on the Kalos League. They defeated the Elite 4, but were confronted by Slam in lieu of the champion, and lost to their old Quagsire. After the battle, Ever decided to reintroduce their old and new teams.

Ever was not up to much in Ranger-2, though they did obtain Pleth during this time.

While in Hoenn, Ever decided to rechallenge the Gyms, less out of a pressing need to and more out of a desire to train their new team members Pleth and Must. During this time, they also encountered the Jims, a series of ramshackle buildings run by an Indeterminate Person who repeatedly attempted to kill Ever using things greatly resembling Pokémon.

Upon arriving at the League, Must revealed himself to be Muninn, the Latios that Ever and their team had fought back in Orre. Ever was severely injured during this battle, but succeeded at killing the Latios.

In the aftermath of the arc, Ever obtained Brushfire, a Fennekin that had been following them around in search of food.

In addition, Ever teamed up with Amanita, Brie, and even All to rescue PEFE!Every, who had been kidnapped by an unknown enemy. Upon finding her, they met Revy II, who attempted to enlist them in her goal to revive their shared ancestor. Ever battled Cornelia, who had been sealed into a mech suit that greatly enhanced her abilities. Upon finally defeating Revy II, Ever took custody of Cornelia.

Mostly seeking to train Brushfire and Cornelia, Ever avoided the official Gyms in Sinnoh, which they had already beaten. Instead, they challenged the Jims. During this time, they was also forced to confront their somewhat cavalier attitude towards their own life.

Due to an unspecified debt, they spent most of the finale selling swords, though they did participate in the Lanius battle due to their personal hatred of the Samurott.

Arriving in Alola, Ever once again boxed most of their team, except for Pleth. The first Pokémon they found in Alola turned out to be Muninn, who had been reincarnated as a Mimikyu. Deciding to teach Muninn to be a better person, Ever obtained the rest of their Alola team to give the ex-Latios some new faces to interact with. During this process, they realized they had no means of moving between islands, and began making peculiar deals with even more peculiar people to get from place to place.

Ever's Alola team gave them a number of new goals, most notably the acquisition of nectar to turn Narrow into their Sensu Form. However, they were unable to enter Poni Meadow until they had completed the League Challenge, which left them stuck.

Ever spent most of Alola, as a result, wandering around more or less aimlessly. At one point, they went with Amanita and Brie to retrieve something Revy had hidden in a grotto near Seafolk Village, only to lose their left arm to the Kartana that had taken up residence there.

Ever spent most of the remainder of the arc drifting around, and getting increasingly more in touch with their ghostly side. During this time, they made increasing use of an inexplicable ability to translocate themself in or out of situations. They also spent some time assisting PEFE!Every while she was stranded in Alola, particularly during her work with Mobius.

After the rifts broke open, Ever decided they'd been putting off their Island Challenge for long enough, and completed it in a single day.

Ever is usually friendly and outgoing. They aren't fond of violence beyond the friendly sort, and have a tendency to sleep a lot. They do tend toward insecurity on occasion.

As Ever has gotten older, while the core of their personality has not changed significantly, they've adopted a different outlook on the world. Particularly after the events of Orre and Hoenn-2, they've made a conscious effort to be both more pragmatic and more perceptive, at the same time increasingly refusing to take situations seriously or really apply deep emotion. They realized their tendency towards this trait during the Re: Glitch arc, and have been attempting to curb it as well, particularly attempting to value their own life a little more.

Ever has developed a mischievous streak, particularly towards people who put on a stoic face.

Ever loves ghosts, the fae, and just about anything supernatural. This couples with a general lack of resistance to mental influence to make Ever unnaturally susceptible to things such as possession, mind control, and fae bargains. While they manage this facet of themself as best they can, even exploiting it to allow ghosts to move them from place to place, it often leads them into trouble.

Ever allows their team a lot of freedom to innovate during battles, and does their best to play to each Pokémon's individual strengths and interests. Their general approach is to set up complicated field states using unusual interactions of different moves, followed by a single finishing strike.

After changing their appearance, Ever dyed their hair blue and changed their entire wardrobe to blues of varying shades. Their theory is that once you've become sufficiently blue, you stand out so much you go around the edge of the scale and become inconspicuous.

Ever has been friends with Onion since childhood, after a bizarre incident involving Krokorok. Though the two separated for a long stretch of time, they have recently reunited. Ever also had a crush for a time on Onion's sister, Shallot.

Ever is going out with Mezzo, as of the AU arc.

Aside from at least a vague acquaintance with all group members, Ever is good friends with Rex.

Ever is currently Tagg's apprentice, and has taken on Megan on as their own apprentice.

For a time, there was a certain level of apprehension between Ever and Kai due to a number of incidents, particularly involving a body swap between Kai and Mezzo; however, they have since moved past this barrier, and are now buds.

Ever is distant cousins with All, Amanita, Brie, and PEFE!Every, and all five are descendants of Revy. Save for Brie, they have issues getting along with all of their cousins for various reasons. However, they firmly consider them to be family.

AU!Ever never went to Sinnoh, instead taking his Pokemon journey in Unova. He caught a completely different team, and the start of the AU arc found him about to reenter Nimbasa.

After the timelines were split off, AU!Ever found himself with a destroyed home city and dead parents. He blamed OU!Ever for not doing enough to prevent this, and by extension most things to do with the original timeline.

For a while, AU!Ever (still going by Every) wandered the earth, over this time most of his team, save Nylon and Blobble, left him. He found himself once again in Nimbasa when the mon bombs were dropped, and he was turned into a Dunsparce. Shortly thereafter, Blobble kidnapped Every, separating him from Nylon. The two came across AU!Mezzo, who rescued Every from Blobble but wanted nothing to do with him, despite Every's tagging along with them to Black City.

When Black City was taken over by dragons, Every and Mezzo were confined to a small apartment. From within this, they conducted messages to various Unovan mons, putting together a small army to oust the dragons. Over this time, Every fell in love with Mezzo, and confessed his feelings after the defeat of the dragons.

Other!Every did go to Sinnoh, but his initial plan to obtain a Chimchar and a team of Ghost-types succeeded, as Diesel was busy teaching a Swablu chorus that day. He proceeded to defeat the Sinnoh League, and then returned to Unova.

His first appearance found him having been living in Unova for some time already. Time spent mostly around the dead had rapidly accelerated Every's emotional development towards a sort of brightly cheery morbidity. He encountered Other!Tangent in Nimbasa, and decided to accompany him on his quest to locate Other!Tracer. The two eventually went to PMD-B.

Later, they arrived in the OU. By this point, Every had begun to identify and present as female, also changing her personal style to match that of a Hex Maniac.

Other!Every maintains a more extreme version of Ever's more fatalistic and morbid tendencies, as well as remaining relentlessly cheerful at all times.