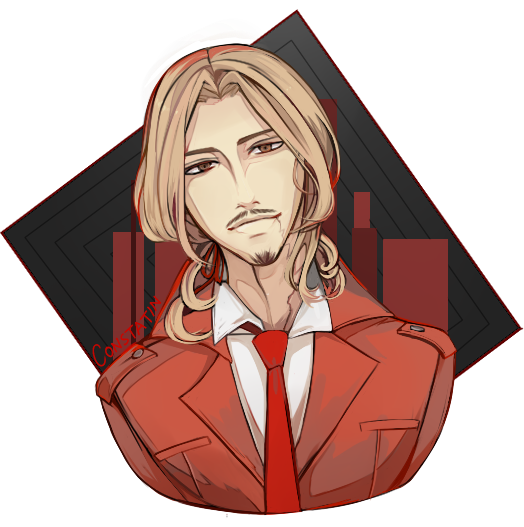 Artwork of Constantin by blackbunni.

Constantin is a 32 year old Pokemon Trainer from Shalour City in Kalos. A psychic and former noble, he spent the scraps of his family fortune on his admission into Team Flare in which he worked as a high ranking spy and interrogator for the syndicate. He has an unrequited infatuation with Fool and has a seething hatred for Tagg, hence all of his attempts to undermine and sabotage their relationship.

Currently, he is the leader of Team Neo-Flare and is the one who ordered the creation of the Infinity Tech.

Constantin is a rather tall and lean individual, towering at around 6'3 but lacking in obvious bulk. He has honey-blond hair that goes down to his shoulders (and is slightly longer in the back) with a matching coloured pencil-line moustache and goatee and coffee brown eyes. Following a confrontation with Sol and Tagg, his right eye was crushed by the former in a surprise attack. His skin is slightly sun kissed, which is odd considering he's former nobility. His everyday attire changes on the situation he finds himself in, but as of late, he wears a red crimson suit with a matching longcoat befitting of his position as the leader of Neo-Flare. Occasionally also walks with a black, gold-tipped cane.

Constantin's is rather stoic, sardonic, manipulative, sly, ruthless and insane by nature. He doesn't seem to care about moral codes or rules when it comes to achieving his goals and is quite willing to do the less than honourable or heroic actions if it means getting from point A to point B faster. He also has a way with words, and is quite charismatic if the situation requires it as witnessed by his manipulation of Fool. When around certain people (like Tagg) or when his usually polite and cold demeanour has been chipped away, he turns into an angry, spiteful and violent individual and may attempt to break people, psychologically or otherwise.

He's a self-confessed madman, but due to his refusal to see anyone about his condition, it's unknown what he actually has. Though, he has displayed traits of both schizophrenia and antisocial personality disorder (psychopathy).

Not much is known about Constantin's past, due to his enigmatic nature, but from the details given it was not pleasant. It seems to be that his parents were either neglectful, abusive or both considering how he preferred the company of Pokemon to that of people. It also appears that at least one of his parents wasn't fond of Psychics or those on the Auric Spectrum, due to him mentioning that he was beaten for using his powers when he was younger. He also once had a cherished Alakazam named Brutus who died of unknown reasons when he was 12.

Presumably before he joined Team Flare, Constantin worked in a morgue for 3 years. As such, he has an uncanny wealth of knowledge about the human body.

After he inherited the little wealth that remained on his parent's passing, he used the money to join Team Flare and worked for the in the Espionage & Interrogation Department. It seems that he was very good at his job, considering that he mentioned that he was one of elite and that he was called in on tough interrogation cases to use "Enhanced Techniques" (probably psychological or psychic induced torture). Though, it remains unknown if he was an admin or not.

During his tenure at Team Flare, he was asked to spy on Fool and do a little bit of digging on the J-team due to her connections to the group. So he posed himself as a guide and got to know her on a personal level. It seems that during this time he became legitimate friends with Fool and fell in love with her. Unfortunately for him, she seems oblivious to his pining and considers him "just a friend" much to his dismay.

It was in Shalour that Fool introduced Constantin to Tagg, whom he instantly deems unworthy for Fool's affections. Pretty much from the get-go he interrogated Tagg about his relationship and often put him on the spot, in a failed attempt to prove to Fool that he was unworthy for her. When that didn't work (mainly due to Fool's own obliviousness), he changed tactics and started spying on Tagg, overhearing his private conversation with DS. He then informed Fool about this conversation before confronting Tagg in the Tower of Mastery, who he then tormented psychologically.