Shaun Sapphire is the primary Player Character of SwiftSeraph.

Shaun is a tall, lanky young man. He has an androgynous face with freckles. His hair is black and stops just above his lower back, usually in a ponytail. and he has stormy blue-grey eyes. His skin is very pale, barely any tan to it. A scruffy black goatee rests on his chin, his only facial hair. His ears are both pierced, usually with silver hoops in; on the right of his back is a tattoo of a Staraptor wing.

Shaun's current standard "casual" outfit is a violet t-shirt, a pair of torn black denim jeans, a gray trench coat with a gold trim and accents, a dark gray scarf, a pair of black hiking boots, a black backpack, black teashades, a pair of black fingerless gloves that go up to the elbow,and a black belt with Poké Ball holders.

Shaun's Galar League outfit is a replica of Champion Cynthia's signature outfit, minus the headpiece. The back of the coat is emblazoned with a purple "413" and a silver, stitched signature from Cynthia.

Shaun has a variety of outfits for other occasions, notably a collection of longcoats, a nice suit complete with tailcoat and top hat, and various sets of armor, such as one made to resemble an oni.

Shaun's Aurabolt alter ego. Dressed in gray rags and leather armor, and a gray cloak. Two crossbows mounted on his wrists as weapons. His mask is split into two halves - a black cloth mask with a print of smiling, sharp teeth, and a more hi-tech set of goggles.

He is witty, intelligent, and kind, yet also proud, snarky, argumentative and hot-tempered. He hates people who mistreat Pokémon and takes good care of his team. When he fights, he pushes his team to their limits, but makes sure to not overwork them. He's the kind of person who respects others, but lives by his own rules.

Shaun's just an average kid from Sunyshore, born to an Unovan father and a Sinnohan mother. Raised by them, his parents' Eeveelutions Amethyst and Blue Moon, and his godfather, he lived a happy content life, despite how...eventful life could be. He was homeschooled by his mother and Amethyst, who taught him many things, including Monese. On his tenth birthday, he began an apprenticeship with Marshall. As much as he enjoyed helping with the breeding and caregiving, he wanted more in his life. His wish came true on his thirteenth birthday when he received a Piplup egg, a Premier Ball, and 5 Poké Balls. After the egg hatched, he made it his goal to train and build a team and enter the Sinnoh Hall of Fame. He came close, but didn't get to challenge Cynthia. Undeterred, he and his team decided a change of scenery was needed and they would return to defeat the Elite Four, so they headed to Alola, where, unbeknownst to them, much lay in store...

During this arc, Shaun did his trials, joined the J-Team, and got caught up in various shennanigans. He managed to become Champion of Alola during this arc, and succesfully defeated Cynthia and became champion of Sinnoh during the interim between this arc and the next one.

[TO BE ADDED ONCE I ACTUALLY REMEMBER]

In the AU, Shaun grew up rather differently than his OU counterpart. As a result of DS's failure to calm Giratina, he and his family had to flee Sinnoh, opting to leave for Unova, as his father used to live there. Eventually, however, the events of the Alternate Timeline arc and the Draconic Uprising arc took place. During the former, Shaun became separated from his family, having only his two Pokémon and two of Marshall's with him. Whilst he was on the run, hiding the best he could, his mother and her Espeon were killed, and his godfather lost a leg. At some point near the end of the war he found two eggs, which turned out to contain the reincarnated forms of his mother and Amethyst. Between the two arcs his life obtained some semblance of normalcy. Cue Draconic Uprising. Shaun woke up as a Starly, his AU!Pokéform. Horrible death and destruction, gaining his scar, et cetera et cetera.

As a result of the two wars, AU!Shaun became much more cynical and jaded. He stayed at home all the time, angry with the world. Team Locke changed that. When Shaun traveled with them, he eventually softened and realized that there are things worth fighting and living for.

Shaun grew up to marry Jessica and eventually settled down on a ranch. He fathered two twin children - Kaiiseii and Isbrand - and ensured they lived happy, fulfilling lives, doting on them and providing them with whatever they wanted and needed.

Like most of the population, Shaun was killed by the Beast. Rather than being butchered in his sleep, however, he died fighting with Jessica and their Pokémon so that his children could flee - the final sacrifice this version of Shaun would ever make for his kids. 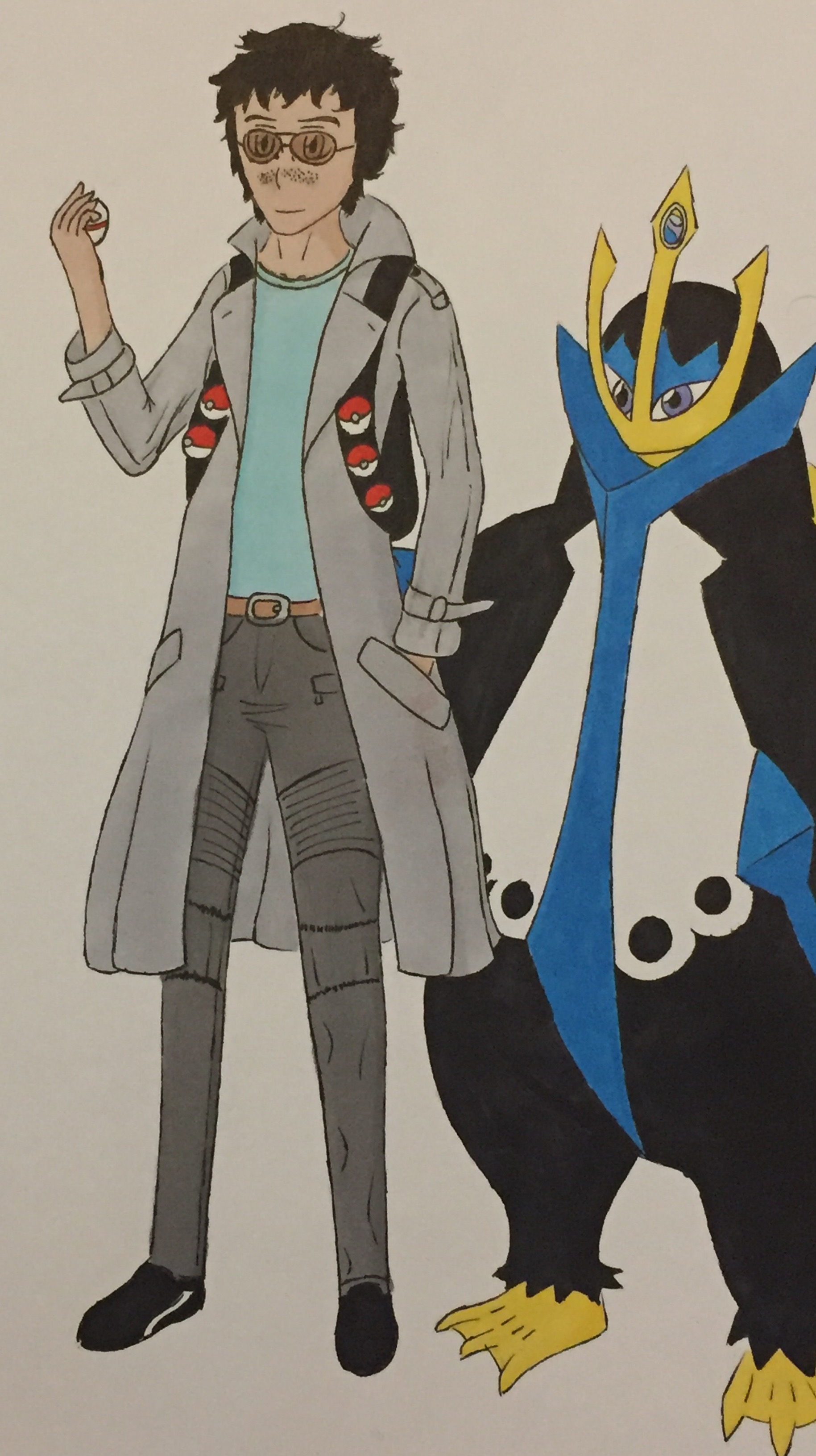 Shaun and Tsunami, courtesy of Phazya. 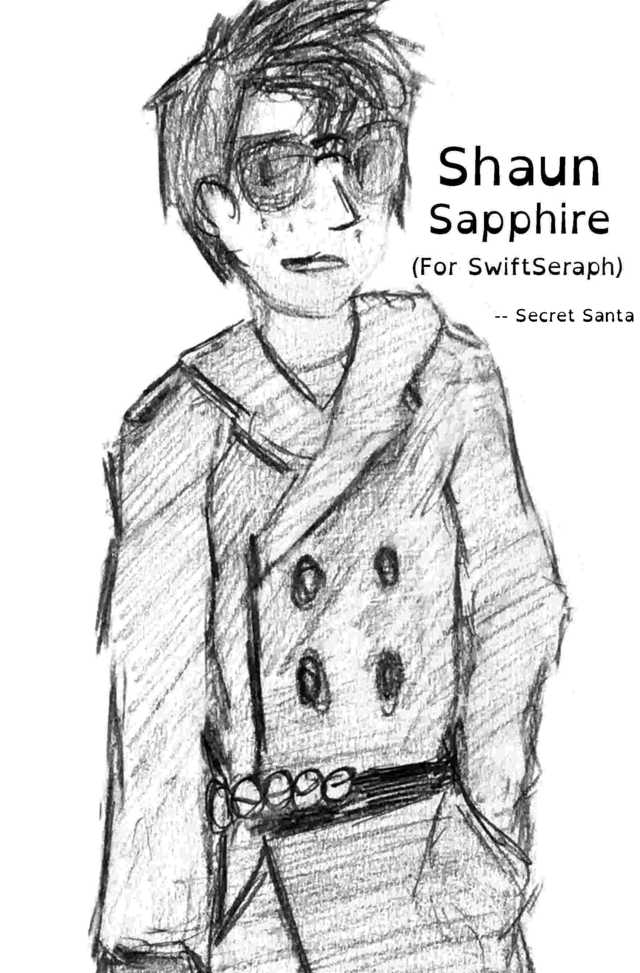 A sketch of Shaun by our very own Bittersweetnsour.