"I have studied up on many classic novels and analyzed them to the point of complete comprehension; is that a problem to you?"

Letina is Axis Hunter's Shiny Combusken, and the third Pokemon they caught on their initial journey.

Letina is, in every way, a very stern, wise, and no-nonsense Pokemon. She is very stoic and quiet, and doesn't usually say much unless she feels like she absolutely has to or if she wants to make a point-- or, for that matter, if she is talking to her partner Axollo. Much like Elton and Freddie, Letina is a complete and utter foil for Axollo in every regard. While the latter is childlike and silly, Letina is studious and bookish, and a bit of a cynic regarding her worldview. This slight cynicism emerged as a result of her favorite pasttime- reading and analyzing classical literature, which she is very fond of doing in her spare time (her debut appearance had her reading the WAAPTian equivalent of Steinbeck's Of Mice and Men). However, to Letina, reading classical literature is more than just a hobby-- it's also how she gains knowledge, both good and bad, about the world she lives in. As such, Letina is extremely wise and knowledgeable, possessing a great deal of intellect on a lot of different subjects of standard academia, not just classical literature. She is also a bit world-weary as a result of her hobby, as she has learned a lot of awful things about the world from her analyses. However, Letina is more realistic in her worldview than she is cynical, as she has also learned that there is plenty of good in the world as well. As such, Letina has a tendency to view things in a very realistic lens. While this is a benefit, as it means that many people and Pokemon can come to her for advice, it also means that she isn't without flaws as a result. She tends to be brutally honest towards other people and Pokemon, often has a tendency to overanalyze books, and can very often be too stringent towards Axollo. However, despite her annoyance with many of Axollo's whims, she does genuinely love and care about him, and will protect him when things get rough. She also isn't as above it all as she thinks she is, and sometimes will oblige to Axollo's requests to watch Silly Cobra's Trapeze Show with him or to play roleplaying games. However, she, naturally, treats these things as seriously as possible... which in turn only serves to make her funnier. Additionally, Letina has the unique ability to speak human language, something she picked up on when reading her books and something that she promptly used to shock Axis, Puxiki, and Tekkan. However, as she is still a Shiny Torchic, she can oftentimes take things too literally, and has a bit of a tendency to misunderstand human idioms or figures of speech, much like Orwell and Peechee. In battle, Letina serves as the group's main strategist, initially preferring to strike with status moves such as Sand-Attack to lower the opponent's accuracy, as she did with Tekkan in her and Axollo's capture Double Battle. She pays very close attention to the opponent's moves so as to know what move to counter with and if she has an opportunity to strike, and when she does, she promptly strikes very hard and very effectively.

Letina's personality profile is below.

Your name is LETINA. You are a SHINY TORCHIC.

In every single regard, you are the EXACT OPPOSITE of both PUXIKI and TEKKAN in terms of your PERSONALITY. While the former is RATHER NAIVE and the latter is FAST AND QUICK-WITTED, you are, by comparison, STOIC, SERENE, and a bit CYNICAL in your worldview. However, you lean more towards the side of REALISM, rather than pure CYNICISM. For many years of your life you have lived without a TRAINER, your only compatriot being the SHINY MUDKIP that is now walking beside you in full SPANISH INQUISITION GARB. And your BOOKS. Yes, you can READ, what kind of self-respecting Pokemon doesn't know how to READ? Anyways. You will thoroughly admit that you find your SHINY MUDKIP companion a bit ANNOYING, to say the least. He is, after all, far more EXCITABLE and SILLY than you, often indulging himself in rather UNCONVENTIONAL MEDIA and ROLEPLAYING GAMES that interrupt your READING. However, this doesn't mean you don't LOVE AND CARE ABOUT him, as you would do ANYTHING TO PROTECT HIM, and sometimes will even OBLIGE to his RATHER SILLY REQUESTS. Of course, though, you treat these things about AS SERIOUSLY AS POSSIBLE... which ONLY SERVES TO MAKE YOU FUNNIER. Much to your chagrin. Speaking of which- you're also VERY SMART AND VERY SERIOUS ABOUT THINGS, to such an extent when you sometimes don't know when to LOOSEN UP FULLY and just HAVE FUN. You and ONE KENDALL REVER would get along very well... but unfortunately, he will NOT BE YOUR TRAINER.

You are VERY KNOWLEDGEABLE about a lot of things, and are just about as far from NAIVE as one can possibly get. This is mainly as a result of your INTERESTS: most notably BOOKS, HISTORY, and STANDARD ACADEMIA in general. If you were a HUMAN, you'd be considered the TEACHER'S PET. You are particularly interested in CLASSICAL NOVELS, which you enjoy ANALYZING in order to learn more things about the WORLD IN WHICH YOU LIVE. And you have found out many, many things about the world in which you live. Things that many people would find to be a HARD PILL TO SWALLOW. War Is Hell. ANYONE CAN DIE, at any time, and sometimes for completely unfair reasons. Sometimes, one has to resort to rather violent measures to accomplish things. People are rather selfish in their goals and worldviews. And so on. And yet... you have also learned things that have given you SOME MORE FAITH IN HUMANITY. There are also plenty of KIND-HEARTED PEOPLE in the world. ORPHANS can be adopted. GOOD PEOPLE EXIST. Sometimes, justice is in fact SERVED. And MIRACLES CAN HAPPEN; you just have to know where to look. In short, you are the kind of Pokemon that doesn't see the world in BLACK AND WHITE. Instead, you've become able to recognize it for what it is: VARYING SHADES OF GRAY. And while this is very well and good, and allows you to know who to trust, it also means that you can have a tendency to OVERANALYZE books, be TOO BRUTALLY HONEST, and SHUT DOWN YOUR SHINY MUDKIP COMPANION: even if sometimes he has a point. In a STRIFE you are very STRATEGIC, paying close attention to the OPPONENT'S MOVES so that you know when you have an opportunity to STRIKE. And when, in fact, you do STRIKE, you do so VERY EFFECTIVELY. If you were a HOMESTUCK TROLL, your STRIFE SPECIBUS would be FLAMEKIND ABSTRATUS. Oh, and for the record, due to your CONSTANT READING, you can also SPEAK HUMAN LANGUAGE, though you sometimes don't pick up on SUBTLETIES and HUMAN IDIOMS.

In about ten minutes WAAPT time, you will be caught by one AXIS HUNTER.

Level of Homestuck familiarity: Absolutely none. 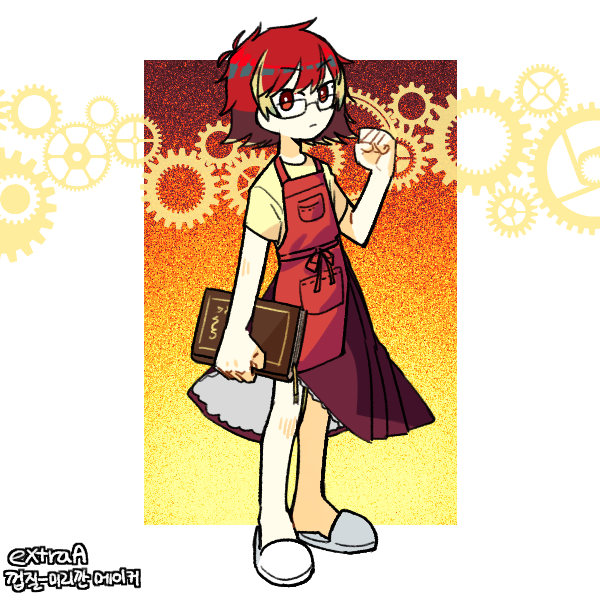 A prospective fullbody Letina gijinka, as done by Goldenheart388.