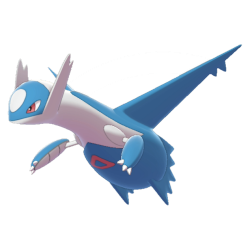 Eon is Luke's Latios that he owns in the alternate timeline. He was caught outside the Pewter City museum after a tough battle with Lake and Cinder (Mirroring the Latios event in Pokémon Heartgold).

Being a legendary Pokémon, Eon considers himself to be above most mortal Pokémon, and constantly looks down upon them for it. He also detests having Luke as a trainer, feeling that legendaries - being stronger than the vast majority of Pokémon - have no need for them.

Despite his abrasive nature, he has show hints of a softer side, as shown when the alternate Lake first met the alternate Nadia as a Bagon, having almost beed reduced to tears at the sight. That being said, if there is a more caring side to him, he certainly isn't keen on showing it.

As of the RtAU arc, he has become a member of the Seven Jerk Dragons.

Eon hasn't been seen battling, but he tends to end most fights with one powerful blast from a Special Attack such as Luster Purge or Dragon Pulse.