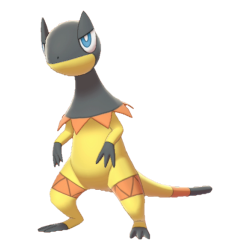 Izzy is Luke's Heliolisk. She was caught in Goldenrod City when he found her living as a street rat after a pathetically nasty encounter with a feral Raticate.

Izzy was born on Route 9 in the Kalos region. Not much is known about her early life here, as she was soon caught by a male trainer, who traveled the Kalos region for a short while before deciding to head to the Johto Region. However, Izzy didn't get on well with her trainer, and after a particularly nasty disagreement between the two upon arriving in Goldenrod City, she was kicked off the team and left to fend for herself.

Wandering into the nearby swamp, she came across a young Totodile named Lake, and the two struck up a close friendship. The two became practically inseparable, until fate intervened and Lake was taken to become a starter Pokémon, leaving her alone again.

Izzy wasn't one to take things lying down. Returning to Goldenrod City, Izzy lived her life on the streets, finding shelter and stealing food wherever she could, hardening her into a true survivor. Although life was rough, she still found the time to travel the Johto region, gathering a good lay of the land as she visited such famous sites as the Ruins of Alph, the Tin Tower, and the Olivine Lighthouse.

Fifteen years later, Izzy would finally be reunited with her friend Lake after he managed to recognize her. Understanding that he had been taken against his will, Izzy bore no ill will towards the Feraligatr for having been gone so long, happy that - even after all these years - he had never forgotten who she was, the two happily renewed their friendship.

Now a member of Luke's team, she explained that she hadn't figured out how to evolve, and that she had no clue what her evolved form was like. After asking around, they visited Ever who showed them his own Heliolisk Cuseinga. Impressed, Izzy challenged him to a fight to get a better feel of just what a Heliolisk could do. Although she put up a fight, Cuseinga was able to use his impressive - and dazzling - array of attacks to defeat her. This was all it took to convince her that she wanted to be a Heliolisk as well, and she took the opportunity to evolve - with a Sun Stone supplied by Luke - right there on the spot.

Izzy hits fast and hard. She makes use of her amazing speed - made even better with her Quick Attack - to avoid her foe's strikes while pelting them from afar with her dazzling Special Attacks. Alongside powerful moves such as Thunderbolt, she also prefers damaging attacks with additional effects, such as Parabolic Charge and Mud Slap.