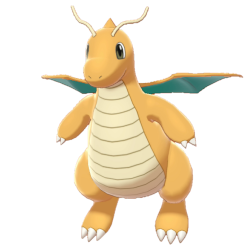 Stratus is a Luke's Dragonite. He hails from the Canyon area on Pokémon Island, where he spent the first five years of his life. However, soon after evolving into a Dragonite some time after his fifth birthday, he was exiled by his father, a viscous Gyarados, for failing to beat him in a ceremonial battle. With no-where to call home, Stratus spent the next ten years of his life wandering the world, visiting far-away lands such as Holon, Unova, and beyond.

At one point on his worldwide journey, he ran into a rather ravenous Feraligatr named Deluge. Bonding over their love of food, they shared a night of passion. But the morning after, the Feraligatr was rather peckish, and finding that he was the one on the menu, Stratus fled for his life. The clutch of eggs Deluge later bore contained both Lake and Ria, leaving Stratus as their father.

One day, he heard about a tournament called the Gold Conference taking place in Jubilife City. Deciding that he wanted to enter, in hope that he could make his father proud of him by winning, he searched for a trainer to join, eventually coming across Luke and his Pokémon. Although he was surprised to be asked by as rare a Pokémon as a Dragonite if he could become a member of his team, Luke gladly accepted, and Stratus has been a member ever since.

One thing that's immediately obvious when spending time around Stratus is that he loves to eat. As long as it's edible, Stratus will eat anything and everything, only stopping when he feels full (which is rarely), or he has a bad reaction such as stomachache (which is often). This rarely keeps him down for long, and as soon as the problem passes, his appetite returns in full force.

Stratus is constantly friendly, cheerful and outgoing. It's hard not to feel cheery whenever he's around. Although he can be somewhat cowardly (Usually punctuated with a loud "Eep!"), he almost always finds the courage to do the right thing in the end. Apart from his one-night stand with Deluge, he seems to have a tendency for falling for various feminine Pokémon, such as Jayna the Flygon or Rairty the Milotic. None of these relationships have managed to stick, though. One is left to wonder if he'll ever settle down with someone...

In battle, Stratus relies mainly on powerful Dragon-type attacks and his ability to fly to get the job done. His most common tactic is to fly around the battlefield, making himself as hard to hit as possible, and using moves such as Dragon Claw in melee, and Dragon Pulse at range to wear his opponents down.

Even though he hasn't been on the team for as long as Lake or Woolly, he has quickly become one of it's most powerful members, to the point where he was able to beat an incredibly realistic simulation of none other than a Mewtwo during the PMD-R arc, a feat he is obviously immensely proud of.