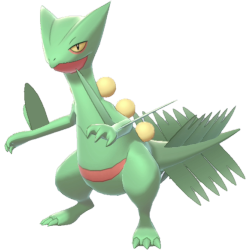 Treeo is Luke's Sceptile, who was born in Teakwood Forest on Renbow Island in Oblivia. He was caught there by Luke (With a Critical Capture, no less!) while searching specifically for a Treecko to add to his team.

Although the Treecko initially got to spend some time on Luke's team, he was boxed before leaving Oblivia, where he was left until after the Gold Conference, where Luke brought him out to train while visiting the Route 9 Cubone Tribe with Tracer and his team in Kanto.

Shortly afterwards, Luke and his team returned to Sinnoh to meet with the rest of the group, upon which Treeo met Salamence, who was still a Swablu at the time. After a short conversation, the two engaged in a friendly battle, which despite a type disadvantage, the Treecko managed to win, granting him the last experience he needed to evolve into a Grovyle.