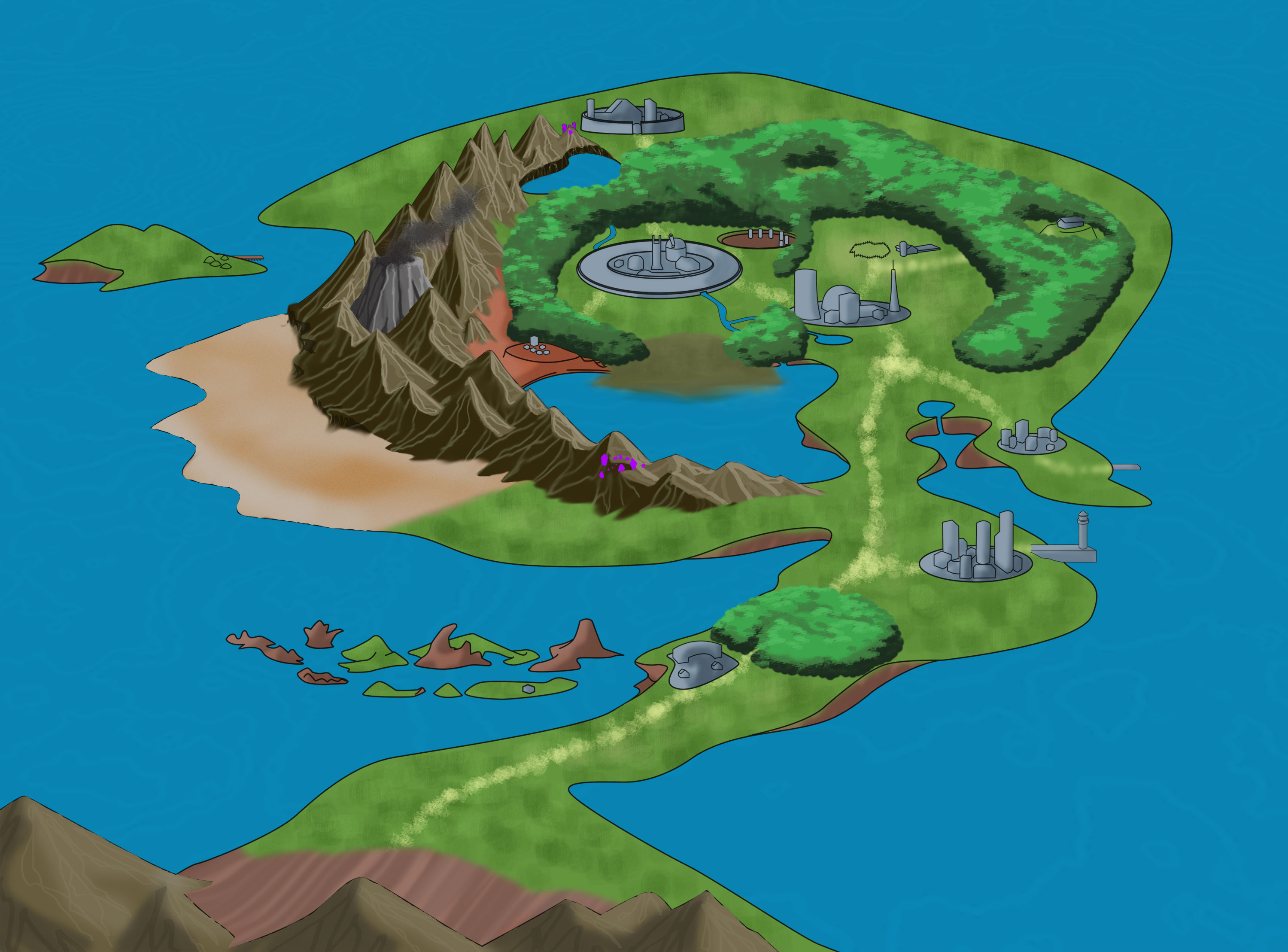 Map of the Holon Region, as drawn by Pikaninja7 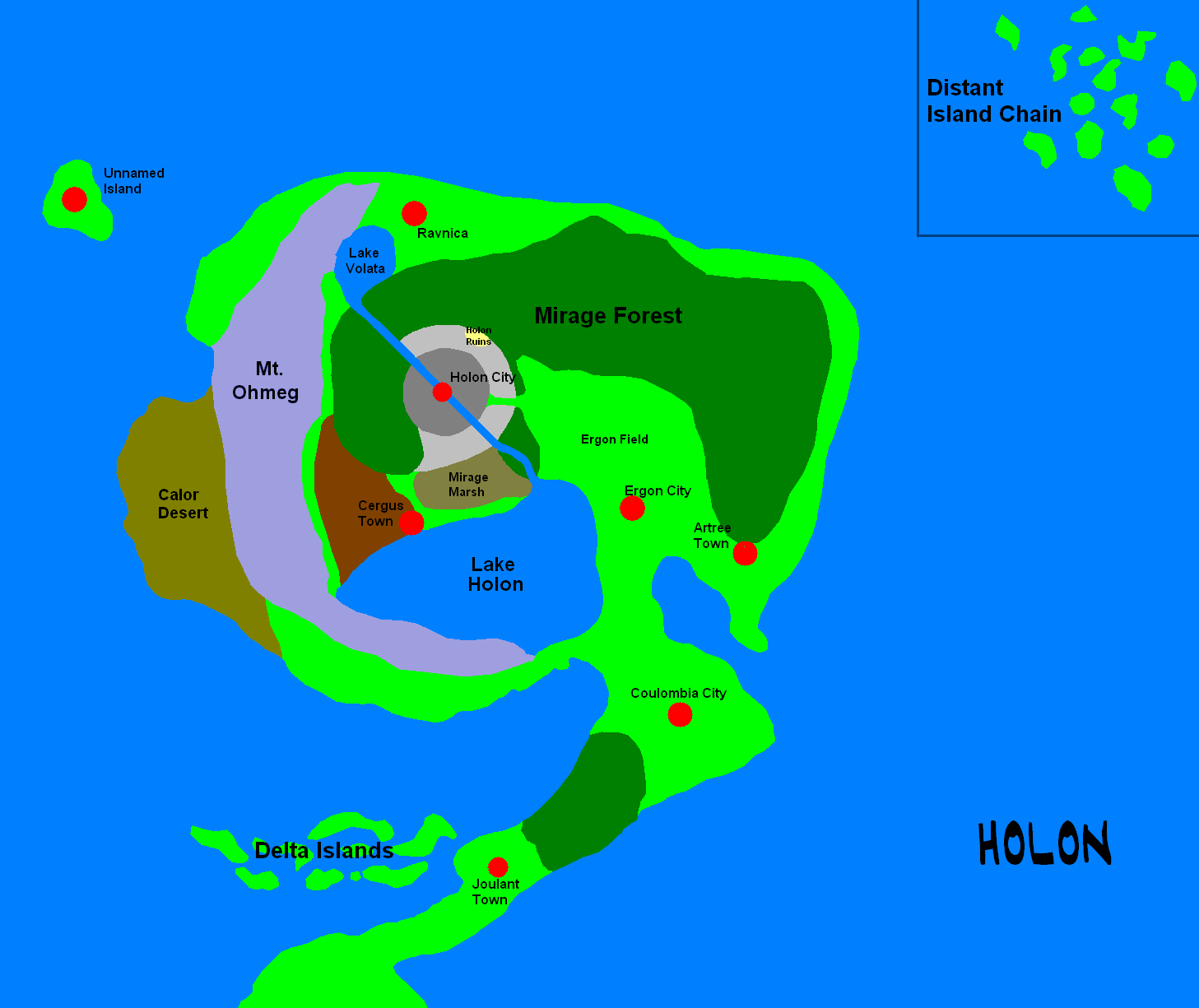 The Holon region is a region in the Pokémon world and the home of Delta Pokémon. It is an unknown distance north of Kanto and Johto, and likewise an unknown distance south of Sinnoh. It is a region from the Pokémon TCG, adapted and expanded to exist within WAAPT. It is comprised of the mainland, the Delta Islands to the southwest, Insula Nui to the northwest, an archipelago to the distant northeast, and an isthmus connecting the region to the continent to the south.

Holon is a mostly land-based region; the islands around the region are unpopulated except for wildlife. Landmarks such as Mt. Ohmeg and the Mirage Forest curve around or spiral outward from Holon City, at the center of the region.

Most cities, towns, and landmarks in Holon are named after energy-related terms.

In philosophy, a holon is something that is simultaneously a whole and a part, a reference to how Holon is the name both for the region and the largest city within it. Unlike most regions, Holon is not majorly based on a landmass in the real world. However, the isthmus which connects it to the main continent is based on Central America. Overall, Holon's shape is based on the symbol δ, rotated 180 degrees.

Holon's routes don't have a traditional numbering system, and most don't have any name at all; the majority of the region is taken up by forests and mountains, making paths difficult to set.

Back in the time of Ransei's warlords, Holon had its own civilization, which eventually fell and left what are now the Holon Ruins, most of which have been buried beneath the ground and remained under what is now known as the Mirage Forest.

Since then, the region has been repopulated by people in search of a Mew said to have been spotted multiple times in the Mirage Forest. Scientists developed technology based on the magnetic properties of the area to track this Mew, but by doing so, they released radiation which mutated most of the region's Pokémon to have unusual types compared to the rest of their species.

Cities, towns, and other locations

Holon has only seven towns and cities, but a rather large number of islands.

Holon also has two lakes, connected by a stream running straight through Holon City: Lake Volata to the north, and Lake Holon to the south. Lake Holon is notably several times larger than Lake Volata, and is named similarly to Holon City in that it is the "central lake" of the region. Between them and surrounding Holon City is the mysterious Mirage Forest, where a Mew is rumored to live. On the western edge of the forest lies a mountain range called Mt. Ohmeg. Strange crystals have been found in all of these sites. Even further west of Mt. Ohmeg is the Calor Desert, an impossibly dry area despite being so close to the ocean.

To the southwest are the Delta Islands, a group of seventeen islands, each with wildlife which shares one of the seventeen known types. There is an eighteenth island which is forming, but still entirely underwater. North of the Delta Islands is an island which is populated with Delta Golett and Golurk. Far to the northeast is an island chain which is mostly unexplored due to its distance. It is considered part of Holon because it has similar magnetic storms and the same strange crystals as those found on the mainland.

At the northeast edge of Holon City are the Holon Ruins, the ruins of a civilization which lived in Holon back during the days of Ransei.

Between the Mirage Forest and Ergon City is the Ergon Field, which is a very flat area compared to the forested part of the region. The west half is occupied by the Warrior Clans, four groups of territorial feline Delta Pokémon.

Holon is notable for having consistent magnetic storms, which render most wireless signals and communications unusable, save for those used by Holon Transceivers. They are also known for shorting out Pokeballs, preventing Delta Pokémon from being caught while in the region. They also create localized aurorae, a phenomenon prominently featured in photographs of the region.

Holon is also a region composed of several microclimates; most notable is the Calor Desert, which is impossibly hot and dry despite bordering the ocean to the west due to Mt. Ohmeg creating a rainshadow. Immediately east of the Calor Desert is Mt. Ohmeg, which is fairly cold. The peaks of Mt. Ohmeg are capped with snow. Additionally, each of the Delta Islands have their own unique climate, corresponding to each of the 18 known types.

Due to the lack of Poké Balls, Holonian people focus more on the bonds with their befriended Pokémon than Trainers from other regions tend to be. Often, it's only one or two partners per person rather than entire teams. Holonian people are also less battle-oriented than trainers are. However, even without an organized league, competitions do still exist in the region; the Ergon Racetrack is one such popular attraction.

Holon also happens to have a large [Latine] population due to immigrants from [Central America], so [Spanish] is a very common second language.