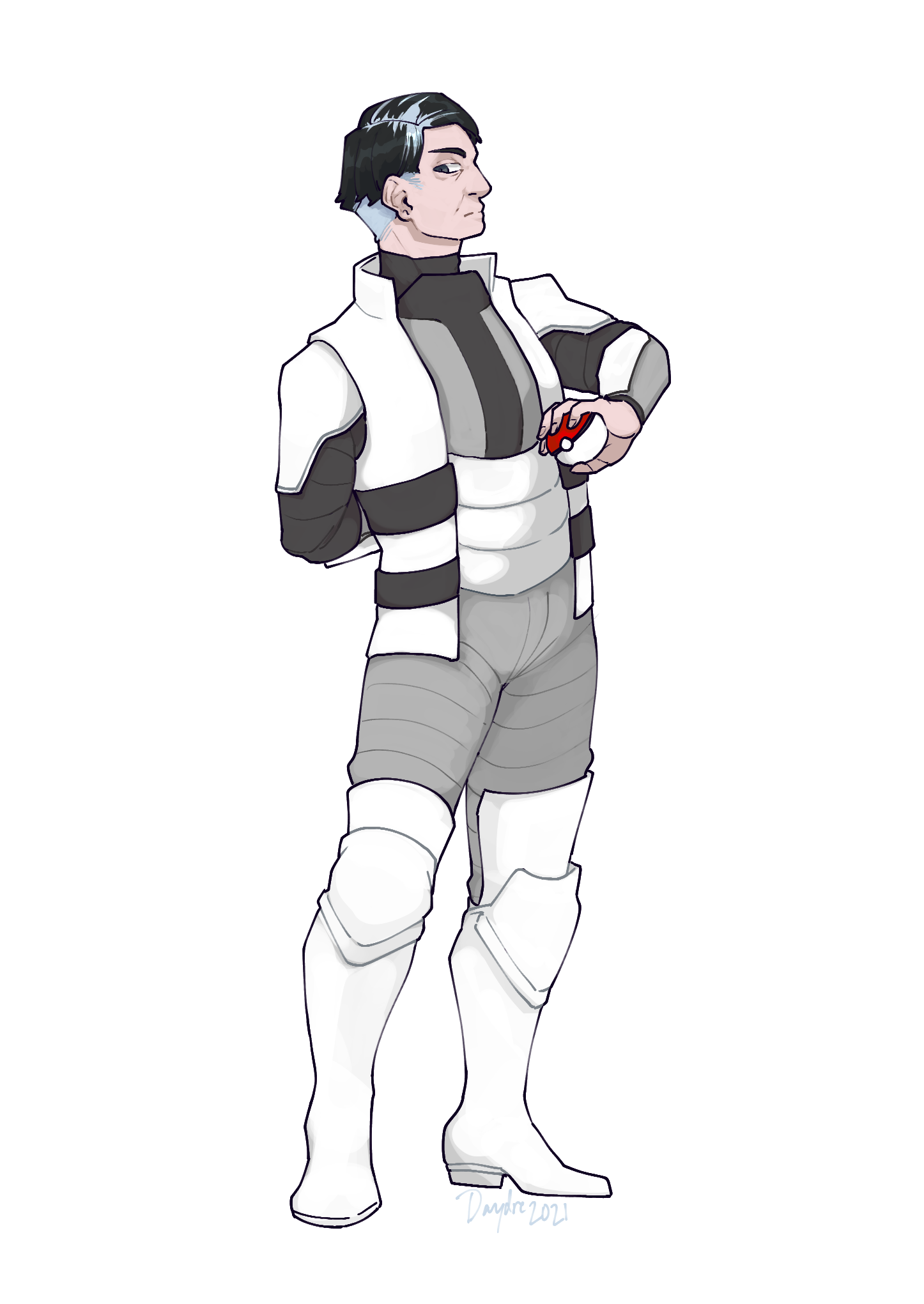 Titan as a Cipher Commander, by Daydre.

Lawrence Cain (formerly known as Titan) was a former Team Galactic commander, a former Cipher Commander, former leader of Team Neo-Galactic, and Lucius' father, who worked for PEFE HQ prior to his death in 2017.

Lawrence bore a distinct resemblance to his son, with grey eyes, a pointed nose and high cheekbones. However, his face showed signs of visible aging. As Titan, his greying black hair was dyed blue due to his Team Galactic affiliations.

As Titan, he was usually cold and highly ruthless. To him, fulfilling Cyrus' dream of creating a new world without spirit was the only goal that mattered, and he would go to almost any ends to achieve it.

He regards Pokemon as little more than animals or tools, though he seems to have a certain fondness for his own Infernape, Omega. Even unusually intelligent or powerful Pokemon such as Edge or Pallad are nothing more than anomalies that need to be investigated further to him. However, his façade of emotional detachment is directly contradicted by his moments of weakness and his strong desire to protect those he views as his family.

Much of Lawrence's history is unknown, though he claimed to have had a long and interesting life prior to settling down in Eterna City. He was an adept Aura-sensitive, and was able to understand Monese thanks to tutoring from Omega and Sidious. He also claimed to have met an Obscuric at one point in his past while he was part of the Travelers, thought apparently the two did not part on good terms. After the Traveler's split, the remnants broke ties with him after he killed his abusive elder brother while fighting in his Pokémon smuggling ring. As a trainer, he beat the Sinnoh League on three separate occasions, one of which was against Ellen.

At some point, he married and decided to settle down in Eterna City, but had to raise his son alone after him and his wife split up. He joined Team Galactic after hearing one of Cyrus' seminars and rose through the ranks of the organisation to become a Commander, eventually creating a schism between him and Lucius when the latter found out about Galactic's true nature. A week before the events at the Spear Pillar, Titan disappeared, predicting Galactic's collapse but vowing to finish what they started.

After four years of evading capture, Titan came to Unova to rescue his henchman Deimos from police custody, and set up operations in the region. He ended up forming an alliance with Edge and his troops after the Bisharp's botched kidnapping attempt of Carol, though the relationship between the two become rather strained after Deimos' Bisharp killed several of Edge's Pawniard during training. Titan remained mostly underground for the remainder of Unova-2, making one more appearance after Edge's death in order to watch Lucius challenge the Unova League and steal his Dream Rift machine afterwards.

Titan's next appearance was in Orre, having joined Cipher as a Commander under the command of Alexiel. One of his first acts in his new position was to snag Regina from Jacob, and he ended up taking Crewe under his wing after she was Shadowed, though both were frequently loaned out to other Cipher operatives. Crow also started to work with Titan during this time as part of his attempt to infiltrate Cipher. Though at first Titan viewed Crewe as no different to any other Shadow, he started to become fiercely protective of her over time.

Eventually, Titan's standing within Cipher took a severe blow when his lab was taken out in a raid led by Lucius and Psyche, the former almost breaking Titan completely by pretending to be a Shadow with the help of an armband then delivering a harsh verbal beatdown. Titan eventually quit Cipher completely after the collapse of the Resources department and a heated argument with Tokarev, asking Crow to return Crewe to the J-Team before attempting to start his own organisation, Neo-Galactic. However, his operations in Orre were foiled when Jacob defeated him in battle and snagged Regina back with Jirachi's help, forcing him to flee to Kalos.

Eventually, Aelia staged a coup and took the reigns of Neo-Galactic with its other admins, which ended up being the push Lawrence needed to give up on his goals and try and destroy his own organization. After Sidious betrayed him, snapping Omega's neck, he turned himself in to get her the care she needed so she would survive. Shortly after, at a trial at PEFE, he was sentenced to work for them, which he willingly took as a means to atone.

Lawrence's heavy use of his Auric abilities led to him suffering from Aura Depletion, and his condition deteriorated rapidly. He passed away at PEFE HQ in 2017 with Lucius at his side.