From We Are All Pokémon Trainers
Revision as of 00:07, 16 October 2022 by BittersweetNSour (talk | contribs)
(diff) ← Older revision | Latest revision (diff) | Newer revision → (diff)
Jump to navigation Jump to search 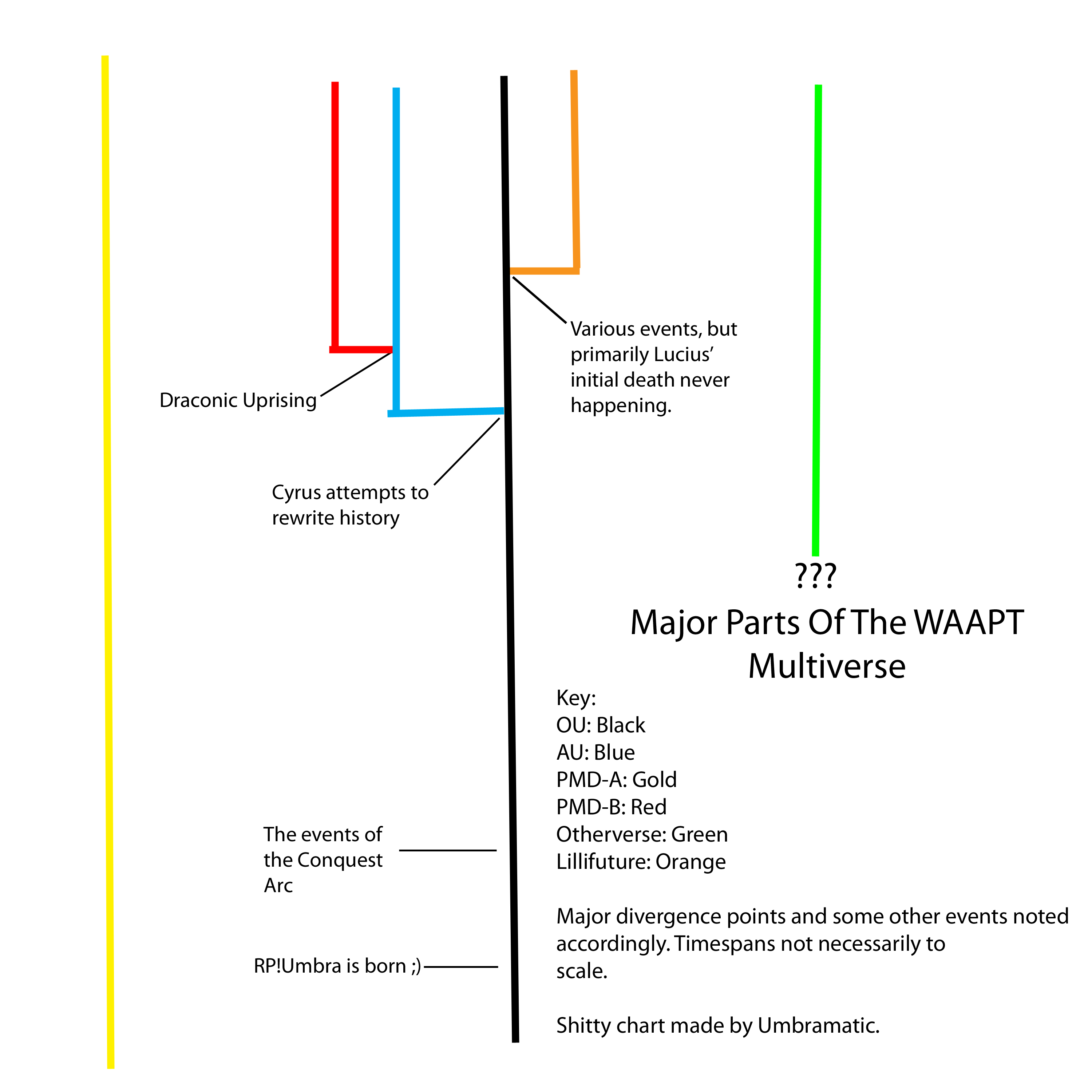 Chart of the RP's major universes.

Original Timeline: The universe where most of the RP takes place. Also known as the OU, or Original Universe.

J-Dan Universe: A timeline split off around the Orre Arc, which spawned J-Dan. Also known as the Danverse.

Orre Arc Game Universe: A universe with a different version of the Orre Arc. Originally Diamond's "green thread" before it was severed from him.

PMD-A: The universe of the Pokémon Mystery Dungeon games.

Lillifuture: A universe where Lucius ended up going mad, Tagg was killed by Constantin, and other such things. Lillianna, Salvador, and Lex also hail from this universe.

No Moon Universe: A universe where a Poison-type legendary is fighting its way back into canon against a Nidoran, successfully as Eternatus as of the end of the Entralink Arc.

Diamondverse, Pearlverse, Dawnverse: Universes with alternate versions of DS's initial journey. Diamondverse takes after Pokémon Diamond, Pearlverse Pearl, and the Dawnverse is a universe where Dawn didn't get the cold that allowed DS to take her place in the OU and AU.

Animeverse: The universe in which Red was replaced by Ash Ketchum, possibly as a result of other divergences in its history.

PlatinumTaggverse: A universe where Tagg ended up being the savior of Sinnoh instead of either Dawn or DS.

Phosphoraverse: The universe where Phosphora comes from, which is implied to be a canon future of the OU.

Awakeningverse: A distant universe near-identical to that of RL!Fire Emblem Awakening, from which Robin hails.

Yangverse: A universe that plays by notably different rules than the normal WAAPT timelines yet has certain similarities belying an underlying close connection. Meta-wise the shared setting of most all of the Pokemon fanfics by a certain player.

StarFox!Verse: A universe based on the StarFox series, with the planet Falconan taking elements from F-Zero, inhabited by humanoid mons. Humans and Pokémon from elsewhere who visit will also take on a humanoid mon form.

PMD-N: A universe based on the Elder Scrolls series, with a similar transformation effect to PMD-A and B. Short for PMD-Nirn.

No Sun Universe: A universe where the sun disappeared at some point in 2016, due to Lily and Scarlette's failure at stopping Necrozma. The Scarlette that appears in the OU is a Faller from this universe.

PMD-S: A PMD-verse based on the Shining series. Short for Shining Force, also known as PMD-R, or Rune.

Beastverse: The universe which suffered an apocalypse caused by a strange glitch known as The Beast. Kaiiseii and Isbrand, along with their mons, hail from here.

Pokefuturesverse, or PMD-C: A universe where the PEFE Founders failed to stop Pokefutures, who in their search for mons for Drives ended up extincting virtually all the mon population and poisoning the planet, necessitating the stealing of mons from other universes. Currently turned into a mostly mon-only verse like PMD-A and B.

Amaverse: A universe where Daydre's latent Obscura powers awakened and overuse turned her into an Aura Vampire going solely by her birth name, Ama.

TPAAWverse: A universe turned completely chaotic by Glitch energies that serves to protect other nearby universes from meeting the same fate by serving as a Glitch sponge that siphons the majority of it away from everything else.

Ironverse: A universe where Team Iron managed to succeed in its goal of killing off the legendaries, but started an apocalypse.

Fledglingsverse: A PMD-universe based on the one that appears in the Pokémon Mystery Dungeon fanfic Fledglings by Tracer Bullet, though altered due to Hess' band of pirates ending up in OU!Alola due to the multiversal wall breakage taking place during the Entralink Arc.

Evil!Goggles Universe: A universe in which an evil version of Goggles is planning to steal all the sand from all the other worlds in the multiverse in order to make the Route 4 desert in his universe the biggest desert ever.

Stolen World: A universe stolen by Swindle. All that is known about it is that, at some point, Professor Rowan, Saturn, and Cynthia team up to stop an Eldritch Abomination.

Westeros Universe: A universe where the weather patterns are akin to that of Westeros from the series A Game of Thrones.

Alt PMD-B: A version of PMD-B in which within Unova the dragons didn't shut down the power grid, making technology levels comparable to that of the modern AU.

FFV!Verse: A mon based universe based on that of Final Fantasy V.

Mario!Verse: A mon based universe based on the Super Mario Bros series.

Most people travel to other universes using the Entralink, but other methods include the use of a Griseous Orb, direct help of legendaries capable of interdimensional travel, Ultra Wormholes, or man (or mon)-made technology.