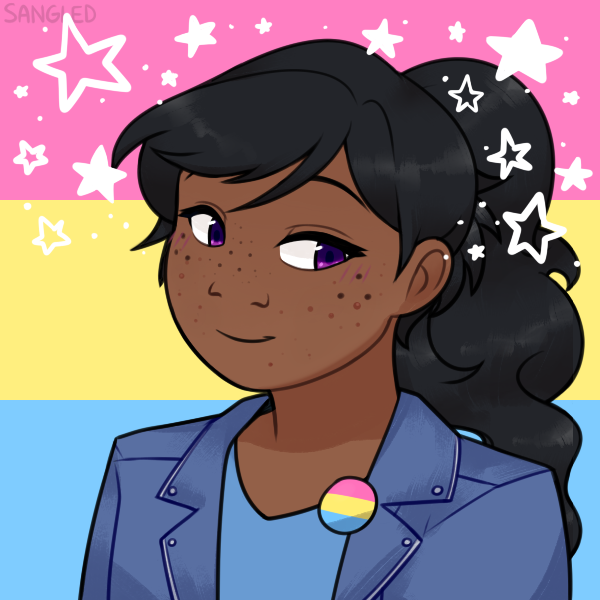 Chiyo, formerly known as Iridium of the 2001 School batch, is an escaped School subject and one of its longest lasting fugitives, having successfully evaded capture or liquidation for more than 20 years.

Chiyo is about 5'3", has the general School phenotype of dark hair with purple eyes, the former she keeps in a ponytail tied back with a rainbow hairband, and has a medium brown skin complexion. Her face is dotted with freckles. Chiyo tends to prefer clothes that don't stand out, partially out of personal style preference, and partially to avoid School attention, but at least one article of clothing tends to be light blue. Around her neck is a birthday present from her Batch's Curium, a necklace bearing a star with a rainbow trailing behind it, which doubles as a keepsake.

Chiyo is generally kind and personable, but decades of having to dodge the School has given her a ruthless edge when it comes to life or death struggles despite her dislike of killing and compassion for her fellow Schoolchildren and even Templars, who she sees as mostly brainwashed slaves. As a result of being a fugitive, she has trouble getting close to people out of fear of the School harming them and/or using them as bargaining chips to coerce her cooperation.

Chiyo was decanted in early 2001 as the 77th member of her Batch, and gained the designation Iridium as a result. At some point she chose to run away from the School facility in Alola where she was being kept, running from Alola (Where she met and caught Dactyl) over to Kanto. Two Templars had managed to corner her and were planning on either capturing or liquidating her on the spot, when a then 10 year old Tagg got involved and easily dispatched them with his Venusaur. Following a brief conversation in which "Katy Boundree" alluded to why she was being chased and she ascertained that the Templars had not gotten a good look at his face, the two parted and wouldn't meet again for the next 20 years.

Chiyo spent the following two decades avoiding the School and honing her abilities, gaining infamy amongst the organization as one of its longest lasting fugitives. It was during this time that Chiyo ended up being forced to kill her batch's Boron in self-defense in September 2006, her close friend/romantic partner Curium died due to rapid aging related cancer, and her joining of the Oasis.

Chiyo is a psychic who specializes in the use of barrier constructs. While she can use them for defensive purposes as expected, deflecting things up to man-portable missiles, she can also use them offensively in the form of sending them crashing into people, creating small barriers with sharp edges in order to throw them at enemies offensively, and having Dactyl bounce off of them in order to increase his momentum and destructive impact. Chiyo can also form miniature barriers inside people's major blood vessels in order to give them lethal strokes, but the technique requires a lot of concentration, making it impractical in open combat.

On the less offensive end, she can form smaller barriers around her wounds in order to facilitate healing.

As an Elemental Auric, she is capable of generating rainbow flames by increasing the temperature of her barriers with telekinesis, which she uses to increase the cutting power of her disc constructs, burn things to cinders in her bubble barriers, and even heat tea. However, she only uses the ability in combat when she's truly pressed, as her regular abilities are very good otherwise.

Her most powerful known ability has her don an armor formed from her barriers as her disc constructs turn into stars that blaze with her rainbow Aura. Said stars on top of keeping their cutting edge can be sent to opponents with enough explosive force to burn them to a crisp.